You are here: Home / Fantasy/Urban Fantasy / Review of Summoned to Thirteenth Grave by Darynda Jones 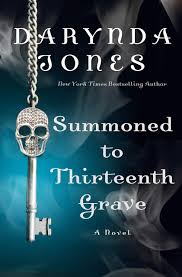 I was so excited when I received an Advanced Reader Copy of Summoned to Thirteenth Grave. This is the thirteenth and final book in the Charley Davidson series and I’ve followed this series since 2011 when Darynda Jones published the first book in the series entitled “First Grave on the Right.” Seven years I’ve been with these characters and the dreaded day finally arrived when I would have to say farewell to them, once and for all.

This series follows Charlotte Davidson AKA Charley Davidson who sees dead people and it’s up to her to convince them to “go into the light.” But when these very dead people have died under less than ideal circumstances — like murder for instance — they sometimes want Charley to bring the bad guys to justice. She has her own investigation business but as it often turns out, most of her clients are the dearly departed.

As the series progresses and the tale unfolds, we meet all manner of interesting characters: ghosts, demons, angels and even Gods and the main characters of our story have all sorts of surprising secrets — some of which the characters aren’t even aware of themselves!

Now you may think that the series sounds spooky — and I guess it can be. But these books are filled to the brim with humor and snarky comments which at times, caused me to laugh so hard that tears were running down my face. In fact, a couple of times my partner would look at me while I was in the throes of hysterical laughter and ask,

“Are you reading Charley Davidson again?”

Now there is so much more to this story than a young woman who sees ghosts — hell, it took 13 books to tell this tale — so I can’t say too much about it since I don’t want to ruin anything for those of you who haven’t read it. Let me just say that the author did an excellent job of wrapping up this series. At the end, it felt like I was saying goodbye and farewell to much beloved old friends.

This last book was phenomenal and I really, really hated to see it end. This is probably my all time favorite series and this is one that I may even consider rereading. Heck, I actually pretty certain that I’ll reread it at some point.

So if you follow the series, know that this final book will be released in January of 2019 and it is a very satisfying conclusion to the series.

If you haven’t yet discovered Charley Davidson and if the premise intrigues you, then you’ll want to start with the first book “First Grave on the Right”. It’s the perfect time to dive in as you won’t have to wait for the next book in the series. They’re all finished. Let me tell you, it was hell each year waiting for the next book to come out.

I don’t really need to say that I gave this book five stars. A huge, grateful thank you to St. Martin’s press and Darynda Jones for providing me with an Advanced Reader Copy.

Purchase Summoned to Thirteenth Grave at The Book Depository