You are here: Home / Mystery / Review of Still Life by Louise Penny 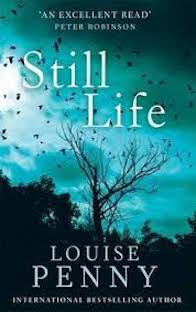 I’ve been wanting to read Louise Penny for a while now as the people in my book club rave about her books. So I picked up the first one in the Gamache series called Still Life.

The story opens when Chief Inspector Armand Gamache of the Surêté du Québec and his team of investigators are called to the scene of a suspicious death in the rural village of Three Pines, south of Montreal. Jane Neal, an elderly woman and beloved longtime resident of Three Pines has been found dead in the woods. The locals are positive it’s a tragic hunting accident and nothing more, but Gamache doesn’t necessarily agree and is soon convinced that Jane Neal death was not an accident. She was murdered.

This book has a fantastic cast of eccentric, complex and likable characters, each with more than their share of faults. There were numerous red herrings peppered throughout the story, and as Gamache deepens his investigation, possible suspects began to emerge. By the end of the book, we’ve pretty much gotten to know everyone, along with their faults and their foibles, in the small town of Three Pines — including the murderer. And everyone has layers upon layers of secrets.

Now even though many people refer to this as a cozy mystery, I’m not entirely sure that I agree. While it did take place in a quaint little artsy town, there was a darker feel to it then you see with a lot of cozies. There was long-standing hatred, fear, homophobia, revenge and, as it turns out, multiple murders. Though it certainly wasn’t gloomy, it doesn’t have that light, almost playful atmosphere you see in the cozy mystery genre.

As is the case with mysteries, one cannot say too much without spilling the beans as it were. Let me just say that this was an enjoyable mystery that kept me guessing until the end. This one I did not figure out.

The only niggle that I had with the book was the depiction of the gay couple. The author relied on stereotypical representations in which they ran a B & B and collected antiques. And then there’s the scene where they were singing “It’s Raining Men” in the kitchen, which caused me to roll my eyes so hard that I saw my brain.

If it hadn’t been for this insulting stereotyping, I probably would have given this book five stars. That being said, this is a solid 4-star read for me, and I hope to continue with the series and see what other kinds of trouble our Chief Inspector gets himself into.