You are here: Home / LGBT Romance / Review of Spokes by P.D. Singer 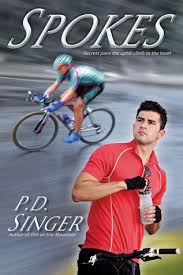 Spokes follows Christopher Nye, a part-time writer for Cyclo World who works in a bike shop and in his spare time loves to ride his bike throughout the hills of Colorado with his best friend, Stu.

His pro cycling idol is Luca Biondi who has, along with his team, recently started training in Colorado. Meeting briefly at the bike shop and later riding out on the road, Luca and Chris form a friendship that quickly grows into a relationship but one that must be kept secret.  Luca can’t afford for anyone either on his team or in the cycling world to know he is gay, mainly due to concerns about negative reactions from the cycling world as well as his sponsors.  He is also still in the closet from his parents. I liked the fact that Christopher knew all of this going into the relationship and never made demands. I also found it interested how Christopher’s writing became one of the major plot points throughout the novel.

This was quite an emotionally hard-hitting book as, given that cycling is a dangerous sport, there are a couple of tragedies in the story that wrench at your heart.

I was definitely on the edge of my seat during several scenes, especially when watching the two of them navigate some challenging and intense events without being able to be emotionally open with each other in public.

Now given that this is a gay romance book, there was this aspect to it as well, which I felt was really well done. Luca and Chris were sweet together, and the romance between them developed at a nice pace and in an entirely plausible way. And though there were a couple of rather steamy scenes, they did not overpower the plot or distract from the story.

There are a lot of biking details throughout the book that I appreciated as I used to be quite an avid cyclist in my younger days and used to follow the Tour de France quite closely.

Now, this wasn’t a story about two fellows who happened to be cyclists; rather, they both lived and breathed cycling, and the story was as much about cycling as it was about the love life of these two individuals.

I swear every scene in the book had something to do with cycling. That being said, I found the well-researched depth of details in regards to the cycling world details refreshing and people who aren’t familiar with the sport will no doubt learn quite a bit from this story.

All in all, a compelling story from the world of professional cycling with compelling, complicated characters, vivid scenes of Colorado and Italy all peppered with a super sweet romance. It was quite a journey that Chris and Luca took, and I’m glad I went on it with them. I give this book 4 stars.