You are here: Home / Mystery/Suspense / Review of Spells for Forgetting by Adrienne Young 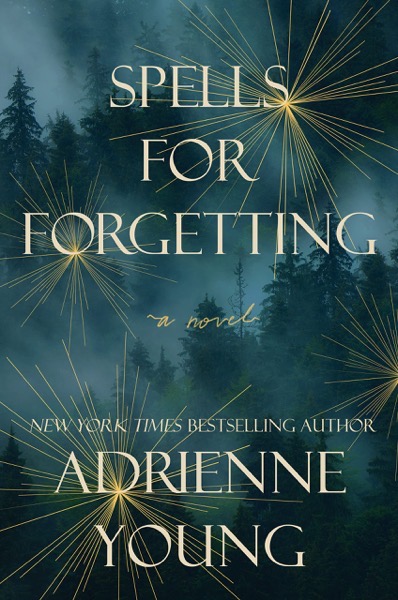 A rural island community steeped in the mystical superstitions of its founders and haunted by an unsolved murder is upended by the return of the suspected killer in this deeply atmospheric novel.

Emery Blackwood’s life was forever changed on the eve of her high school graduation, when the love of her life, August Salt, was accused of murdering her best friend, Lily. Now, she is doing what her teenage self swore she never would: living a quiet existence among the community that fractured her world in two. She’d once longed to run away with August, eager to escape the misty, remote shores of Saiorse Island and chase new dreams; now, she maintains her late mother’s tea shop and cares for her ailing father. But just as the island, rooted in folklore and tradition, begins to show signs of strange happenings, August returns for the first time in fourteen years and unearths the past that no one wants to remember.

August Salt knows he is not welcome on Saiorse, not after the night that changed everything. As a fire raged on at the Salt family orchard, Lily Morgan was found dead in the dark woods, shaking the bedrock of their tight-knit community and branding August a murderer. When he returns to bury his mother’s ashes, he must confront the people who turned their backs on him and face the one wound from the past that has never healed—Emery. But the town has more than one reason to want August gone, and the emergence of deep betrayals and hidden promises that span generations threatens to reveal the truth behind Lily’s death once and for all.

Evocative and compelling, Spells for Forgetting is a vivid exploration of lost love and the unraveling of a small town and its many secrets.

Spells for Forgetting is an adult mystery/thriller that centers around August Salt, who has returned to his hometown on the mystical Saiorse Island fourteen years after he and his mother hurriedly left following the murder of Lily, one of August’s close friends. Everyone on the island is certain that August was the murderer — everyone except for his childhood sweetheart and the love of his life, Emery.

Though unwelcome on the island, August has returned to bury his mother’s ashes, and his presence on the island has stirred up some long-buried emotions on the part of the residents. Additionally, August and Emery begin to ask some difficult questions and as they do, learn that small towns have secrets — dark secrets as well as long memories, and there are still some around who would prefer that the past remains in the past.

A series of backstories slowly reveals the dramatic circumstances surrounding the events of the night in question and, in so doing, deeply draws the reader into the small-town environment of privilege and deep-rooted family ties, resulting in a spooky and unsettling story. I love stories that take place on isolated, creepy islands, especially ones with a deep, lurking evil in a tight-knit community and this book fit the bill perfectly. It was so haunting and atmospheric that I could vividly picture the creepy island in my mind as I read. The writing is sharp, edgy, and compelling, and I love how the story is told via alternating POVs and timelines, unfolding into a rather suspenseful and intricate tale of scandal, deception, class division, lies, betrayal, violence, and murder.

The spooky vibe makes this the perfect autumn read. So if you’re looking for a creepy mystery chock full of dark family secrets with a touch of magical realism, then it’s worth checking out Spells for Forgetting. Populated with wonderfully complex and empathetic characters, Young’s novel is a twisty tale of legacy and unbreakable bonds with the land. Utterly bewitching!