You are here: Home / Mystery / Review of Spells and Scones by Bailey Cates 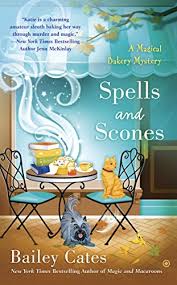 Spells and Scones by is another cozy mystery that I heard about on my library’s podcast, and it sounded like fun.

It takes place in Savannah and follows magical baker Katie Lightfoot who is catering a book signing by a famous self-help author at the bookstore next door to her bakery. A huge crowd gathers for the event, and as the author, Dr. Dana arrives, a few people loudly protest and heckle this self-help Guru, primarily because of her “Radical Trust” philosophy which has proven detrimental to many relationships and something that I found quite creepy. Some of the people there to protest were very, very angry, as some of their marriages were ruined due to Dr. Dana’s advice.

After the reading, the author is ushered to the back of the store to sign some books. Not long afterward, she is found laying on the floor, dead with a scent of almonds in the air. Murder by cyanide, as it turns out. A woman, who was standing over the body when it was discovered, becomes the prime suspect.

As it turns out, the woman accused of the murder is a former witch named Angie Kissel who had stopped practicing magic. She was also divorced after having followed the relationship advice of Dr. Dana. Quinn, the detective assigned to the case, considers it and he is confident that Angie did it.

But Katie’s canine familiar, a little dog named Mungo who once belonged to Angie, convinces Katie that Angie is innocent and urges her to investigate. Deciding to help the woman, Katie delves into the mystery and as she does so, discovers that there are several possible suspects.

Spells and Scones was a light, fun, witchy cozy mystery and, as it turns out, book 6 in the Magical Bakery series. Though it wasn’t an overly complex or twisty mystery, it was a satisfying read with whimsical characters and I may read more books in this series in the future. There are also some delicious-sounding recipes at the end of the book.

Purchase Spells and Scones at Amazon