You are here: Home / Contemporary Fiction/Classics / Review of Song of Achilles by Madeline Miller 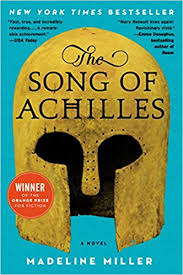 The Song of Achilles is a retelling of Homer’s the Iliad, focussing specifically on the relationship between Achilles and Patroclus. But this book is told from the point of view of Patroclus, Achilles’s best friend who, in this story, is cast as the lover of Achilles. So in this way, the story takes the Greek legends and the works of Homer and expands on them, turning them into something wholly new and different.

Patroclus, a young prince who accidentally kills the son of a nobleman, is exiled to the court of King Peleus and his perfect golden-haired son Achilles, whom we learn is a demigod, his mother being the fierce sea goddess Thetis. Achilles develops a friendship with Patroclus which deepens and becomes something more, much to the displeasure of Achilles’ mother who feels he is unworthy of being the companion of a future god.

I liked the fact that the romantic relationship between Achilles and Patroclus wasn’t rushed or forced but instead built up slowly and powerfully throughout the years. It was definitely a slow burn as these two first grew up together, learned about life together and even fought together, their bond deepening as they matured into young men.

But their world comes crashing down when Helen of Sparta is kidnapped by Prince Paris, the son of the king of Troy and Achilles is strongly encouraged to fight for Sparta. So he and Patroclus journey to Troy to fight with the Spartan army in spite of prophecy that threatens to destroy everything they hold dear.

What I enjoyed is that often, Achilles is portrayed as an arrogant, unsympathetic character but in this novel, we get the see his human and vulnerable side — someone capable of deep love and loyalty. We see his tenderness and his insecurities. It was interesting to see Achilles attempt to balance his duty as a prince and warrior with his love for Patroclus. Though an admirable character, it’s easy to see his weaknesses, namely his ego, excessive pride and errors in judgment.

But it was Patroclus’ character that I especially loved; he was brave, loyal, wise beyond his years and compassionate to the plight of others around him. I loved seeing him transform from a clumsy, socially inept exiled prince to the self-assured and confident lover of Achilles. Though he wasn’t skilled in battle like his demigod lover, he is skilled in surgery, empathy and helping others.

I also loved his description of his epic love for Achilles in one passage:

I appreciated that fact that the author didn’t make their relationship perfect and without strife. Like all relationships, there was conflict. They quarreled, clashed at times, and even hurt each other, but most of the time, their disagreements were because of their deep love for the other — though Achilles’ god-like pride was often at fault.

It’s also interesting to note that Patroclus often played the role of Achilles’ conscience, causing him to consider his actions and evaluate his judgment. It also struck me that it was Patroclus who taught Achilles to be human, to be compassionate and most importantly, how to love. Patroclus cares deeply about people in an otherwise harsh and cruel world, and perhaps this caring for others rubbed off on Achilles, causing him to become more than just a cold-hearted warrior.

Now even though the romance between Achilles and Patroclus is an essential element in this story and helped to illustrate Achilles’ human side, this novel is not defined by that romance. Rather, this is also the story of a demigod driven by honor who grew to fulfill his destiny as a warrior and a hero — perhaps even someone who was tainted by war.

If you’ve read the Iliad or are familiar with the Trojan war, you know that the story has a tragic end; but in case you haven’t, I won’t tell you what happens. But even though I knew how it all turns out, the ending of this book still left me absolutely shattered and broke my heart into pieces. I was so invested in these characters that I couldn’t help but hope that they could somehow escape their fate, to somehow rise above it. So even though I thought I was prepared for how it would hit, it still wrecked me and left me breathless.

Though this ending was painful and heart-wrenching, it was also eloquent and beautiful, and I’m so glad that I read it. This is a book about joy, suffering, war, glory, violence, heroes and the cruelty of men. It’s about pride, hubris, and vanity. But it’s also about being loved and being remembered. The Song of Achilles is a beautifully written book with rich, lyrical prose and a captivating story with a lot of heart about a love so powerful it defies death and time.

The descriptions and settings were realistic and evocative, and because of the richness of detail, I felt at times that I was there with the characters, witnessing and experiencing the events right along with them. It probably helped that I listened to this on audiobook.

All in all, The Song of Achilles is a lush and expertly woven novel that fascinates from its opening words to its tender final scenes, and I ended up giving this five stars.

Purchase the Song of Achilles from Amazon

Purchase the Song of Achilles from The Book Depository