You are here: Home / YA Contemporary / Review of Scat by Carl Hiaasen 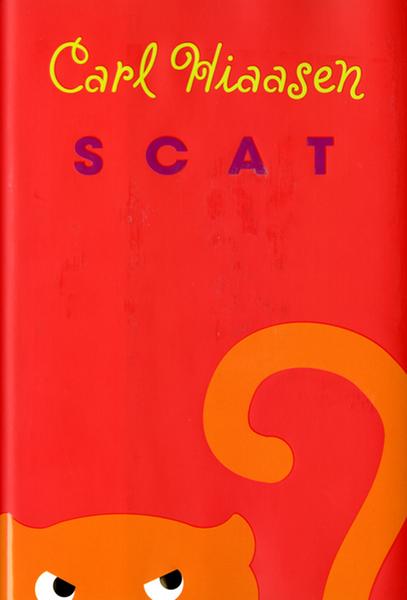 Scat ended up being hilarious and I’m glad I read it. It also takes place in Florida, a state where I used to live and spend a good deal of time so that attracted me as well.

So Scat follows a Florida kid named Nick, whom I guessed to be around 14 or so and whose father is on reserve in Iraq and his friend Marta. So one day Nick and his class are on a field trip when the swamp that they’re visiting catches fire. Mrs. Starch — the feared and unliked biology teacher, vanishes into the fire to retrieve an inhaler that a student had dropped. The bus leaves without Mrs. Starch as she came in her own car.

The next school day, the principal tells the students that Mrs. Starch has been called away on a “family emergency,” but Nick and Marta aren’t buying it — especially once that discover that Mrs. Starch has no family so they feel that there’s something very fishy about Bunny Starch’s disappearance.

They figure the scary, pencil-eating class delinquent, Smoke, who has a history of starting fires, has something to do with her disappearance, especially once authorities state that the fire was due to arson. But they’re not the only ones who suspect that Smoke started the fire. But there’s more to Smoke than meets the eye.

But there’s also a lot more that goes on in the book: there’s the dodgy oil exploration company run by a shady, nefarious fellow who is scamming the state by installing illegal pipelines in the Everglades, which is a nature preserve, there’s an endangered panther that’s being hunted, the strange eco-avenging wilderness man who seems to be sabotaging the oil company’s efforts, and of course, the mystery of what in the hell happened to Bunny Stark.

This madcap book was quite a wild romp – an edge-of-your-seat gripping thrill ride that had me interested — and laughing until the end, as it was hysterically funny in many places with a great cast of characters. I thought the premise of this book was fascinating, and Carl Hiaasen turns this premise into an exciting, fast-paced eco-thriller that I had a hard time putting down.

Though this was a light-hearted enjoyable romp, the book does touch on some serious issues as well such as war, crime, environment preservation, amputation and neglectful parents but does so in a smooth way so as not to make the novel unnecessarily grim or frightening, as this is a middle-grade book, after all. And as many of us like to see in our Middle-grade reads, the bad guys get it good in the end.

I do believe that is is part of a four-book middle-grade series that I definitely will be checking out. I also want to check out some of his adult fiction as well.