You are here: Home / YA Fantasy/Urban Fantasy / Review of Rule by Ellen Goodlett 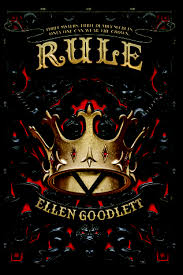 Rule follows three secretive women: Zofi, Akeylah, and Ren, each of whom harbors a dark, traitorous secret that would no doubt lead to her execution if word ever got out. So when the king of Kolonya summons them to the palace, they each believe that someone has discovered their secret and that their days are numbered.

But King Andros has summoned the girls for an entirely different reason. The king is dying, and his only son has recently been murdered leaving no heir to the throne — except that is, for Zofi, Akeylah and Ren, his three illegitimate daughters that nobody knew about.

The king tells the three women that they will train and work with him in the coming days and that he will choose one of them to be his successor. So now they must compete with one another to prove themselves worthy for the throne of Kolonya, so a rivalry develops between the three half-sisters as only one can be chosen as the heir.

However, there is someone out there who doesn’t want ANY of them to rule — someone who knows each of their secrets and has resorted to blackmail to keep them from the throne. The strange blackmailer has given each of them the same choice: leave Kolonya or their secret will be revealed. So as the danger to the sisters escalates, they begin working together each using her own natural talents to try to stop their blackmailer.

What follows is a fast-paced story of political intrigue, magic, blackmail, deceit, dangerous plots, complicated romances, and an enthralling mystery. I found the characters likable and relatable, with distinct personalities and character voices. I also loved how each woman’s secret built up the storyline and overall, felt that the story is clever, engaging and wildly entertaining.

The only thing that bothered me regarding the story’s plot was the magic system. In this story, the people use a form of magic called The Arts. The Arts consists of blood magic tithing, which provides increased speed, strength, and stamina. To activate the magic, you have to cut yourself to draw blood. I found this magic system a bit disturbing in that one had to resort to self-mutilation to trigger their magic, so there was a good deal of cutting in the book. Now I’m not a fan of cutting, to begin with, but I felt especially uncomfortable by this particular system of magic — or any magic system for that matter which involves self-harm to bring forth power.

Magic system aside, the novel held my attention until the very end and had me on the edge of my seat the entire time. And then came the end and it all went to hell. Or should I say, it didn’t go anywhere. The story ended on a disappointing “cliffhanger” in which there was no resolution to any plot thread. Literally, nothing in the story was resolved. It just fizzled out. In fact, the ending was so abrupt that I felt the author terminated the story in the middle of a chapter. It is my humble opinion that if a novel cannot stand on its own, then the author has failed.

I have no problem with books in a series; in fact, I mainly read series these days. But when a book ends on a ridiculous cliffhanger with no resolution, then it’s an utter failure. After I turned the last page this book, I felt robbed — robbed that I wasted three days reading this novel only to end up with…absolutely nothing. It’s a shame really — I really was enjoying the story right until the end, and it probably would have been a four-star read for me. But given that it is only a half-finished book, the most I can give it is two stars.

Now if you don’t mind cliffhangers, then you may want to give Rule a try as it is quite a gripping story. Unfortunately, the cliffhanger killed it for me, and I won’t be continuing with the series.

A huge thank you to Netgalley for providing a review copy of this book!

Purchase Rule at The Book Depository