You are here: Home / Fantasy/Urban Fantasy / Review of Reincarnation Blues by Michael Poore 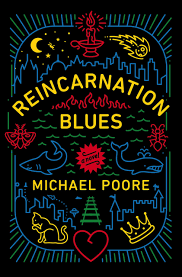