You are here: Home / Book Reviews - All / Review of Rebecca by Daphne Du Maurier 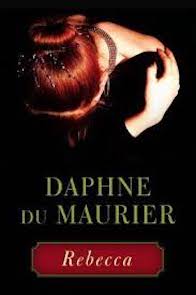 This classic psychological thriller was on my list for a while as I’ve heard people talk about it quite a bit recently. I think I saw the movie starring Joan Fontaine and Laurence Olivier years ago, but I don’t remember it at all.

I listened to the audiobook version of it, and it was fantastic! It was narrated by Anna Macey who was phenomenal! It felt as though the story were being told to me by an elegant 1940’s movie actress. I love Gothic stories like this one, and it really had a Hitchcockian feel to it, which is no surprise given that Hitchcock directed that film.

So the story begins in Monte Carlo, where our heroine, a paid, personal companion to a wealthy, domineering woman (Mrs. Van Hopper), who is on holiday in Monte Carlo meets and is swept off her feet by the dashing widower Maxim de Winter.   An alliance develops between the young lady and de Winter, which leads to a hasty marriage. The reader then learns along with the narrator of de Winters’ disturbing past and of his deceased wife, Rebecca.

It is only when they arrive at Mandalay, his massive country estate, that the new Mrs. de Winter realizes how large a shadow his late wife will cast over their lives. The reminders of Rebecca are everywhere; there are her personalized notecards still in her desk, closets filled with elegant clothes, fur coats, monogrammed towels and robes with giant Rs in script. The girl becomes haunted by the accomplished, stunningly beautiful and elegant Rebecca and more and more convinces herself that de Winter married her on a whim and remains hopelessly in love with the perfect Rebecca. She then becomes consumed with finding out more about Rebecca.

In fact, give that, according to her, she is neither very pretty nor worldly-wise and is entirely out of her element, she’s terrified that Maxim will come to his senses and realize what a mistake he has made and leave her. She’s also overwhelmed and intimidated by the sheer size of the house and given her inexperience, has no idea how to assume her role as Mrs. de Winter.

And then there’s the skeleton-faced housekeeper Mrs. Danvers, who reinforces the girl’s insecurities by continually pointing out the former Mrs. de Winter’s exceptional beauty and elegance, her social skills, her adeptness as managing the household and her legions of admirers and friends.

Mrs. Danvers, who was Rebecca’s personal maid, actually ends up being a phenomenal villain and ends up horribly betraying our Heroine. Shortly thereafter, the 2nd Mrs de Winter begins to find out more about Rebecca and the mysterious circumstances surrounding her death.  And a new threat then emerges threatening to destroy her new life and everything she holds dear.

Rebecca was a delightful story with numerous twists, turns, and surprises. This ended up being an intriguing tale of deception, suspense, crime, secrets and a cast of thoroughly developed and unforgettable characters — all the elements of a true drama.

Although it was first published in 1938, this novel ages exquisitely and didn’t feel at all dated to me. I ended up loving it and gave it 5 stars.

You can check out Rebecca here at Amazon or at The Book Depository.