You are here: Home / LGBT Romance / Review of Rabi and Matthew by L.A. Witt 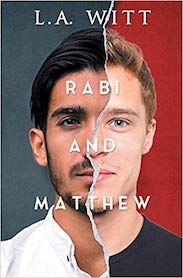 Rabi and Matthew is a gay romance story which the blurb describes as “A queer retelling of Romeo & Juliet, except no one has to bury their gays.”

This novel follows Rabi Hashmi and Matthew Swain who meet one night at a party and end up falling in love. Simple enough story. Well, not really. What makes this story interesting is the decades-old rivalry between the two families as their two fathers run against each other in the election for a seat in Congress. What we have here is Democrat vs. Republican, Muslim vs. Christian and years and years of mistrust and hatred between the families.

Rabi and Matthew know that their love will not be without its challenges, that falling in love with each other in the middle of a war that has the potential of turning bloody is probably not the wisest thing. But they can’t resist the attraction and the feelings that grow between them and decide to take a chance. They meet in secret, often heading out of town in order to lower the risk of running into someone who could report back to their families.

I thought the scenes with them getting to know each other during their secret rendezvous-vous were heartfelt and endearing. Little did they know, however, that the pot had reached its boiling point, and hatred along with escalating racial tensions now threatened everything they hold dear…and not everyone may end up a happily ever after.

I loved the entire premise of a queer telling of Romeo & Juliet, with a white Christian boy from a racist Republican family falling in love with a Pakistani Muslim boy from a Democrat family, with both families obsessed with their hatred. The author expertly handled the storyline, and I was impressed with the clever parallels with Romeo & Juliet.

I also give the author extra points for not stereotyping our main characters as either Romeo or Juliet. Neither one of them fit those roles, for which I was grateful. Now I will say that there is definitely some Insta-Love going on here, but given that it’s a retelling of the classic Romeo and Juliet, I could overlook it. I thought their whirlwind romance was tender and sweet, with there being a powerful chemistry between them. It was a joy seeing the two of them fall deeper in love with each other, in spite of the dangers from everyone around there.

A Plethora of Themes

There are so many interesting themes that run through this novel: racism, hatred, gun violence, violence in general, xenophobia (particularly Islamophobia), homophobia, and politics to name a few. There are some scenes in the book that are absolute insanity, with the hatred, bigotry, and violence overtaking all semblance of reason.

So that being said, this story had plenty of edge-of-your-seat, nail-biting drama that gripped me and held me until the emotional ending. This is the kind of book that takes your heart, tosses it into a blender and then slowly puts it back together at the end; though I will say that the journey was exhilarating.

Now, it’s important to remember that this novel, though it may not seem like it at times, is a romance and not a tragedy like Romeo and Juliet. That’s not to say that horrible things don’t happen in the story, because they do. But ultimately, this is a love story, and though the characters don’t end up with perhaps an ideal happily-ever-after, the ending is perfect in light of the events that take place in the book, so in this way, it was a satisfying conclusion.

I had one main niggle with this book and with one particular scene. It was after our two main characters have just gone through a horrendous experience….I mean the ultimate worst. They dash out of town, rent a hotel room and then jump into bed and have sex. I thought, “Oh come on! Really?????”

I can’t see how anyone in their right mind could or would think about sex being in their situation. This scene struck me as unrealistic, and I just couldn’t buy into it. I actually found this scene so far-fetched and unbelievable that I was ready to bail on the book. But I did stick it out, and I’m happy I did because the author more than made up for it by giving us a beautiful and touching ending.

Rabi and Matthew was one heck of a rollercoaster ride, one for which you might want to have a tissue nearby. There are a lot of intense scenes and heavy topics in the book, and at times, it is difficult to read. But ultimately, I ended up loving this emotionally satisfying story, and I found myself tearfully be rooting for our two heroes as chaos erupted all around them. I thought the novel was well-crafted and deeply engaging, with even a twist or two to keep things interesting. Recommended!

PURCHASE RABI AND MATTHEW ON AMAZON

PURCHASE RABI AND MATTHEW AT THE BOOK DEPOSITORY