You are here: Home / Uncategorized / Review of Playing with Myself by Randy Rainbow 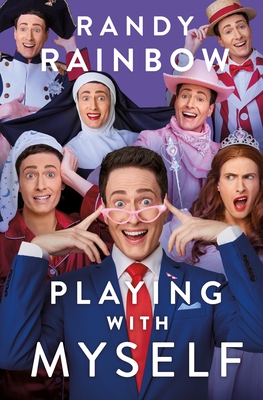 An intimate and light-hearted memoir by viral sensation and three-time Emmy-nominated musical comedian Randy Rainbow that takes readers through his life—the highs, the lows, the lipstick, the pink glasses, and the show tunes.

Randy Rainbow, the man who conquered the Internet with a stylish pair of pink glasses, an inexhaustible knowledge of Broadway musicals, and the most gimlet-eyed view of American politics this side of Mark Twain finally tells all in Playing with Myself, a memoir sure to cause more than a few readers to begin singing one of his greatest hits like “A Spoonful of Clorox” or “Cover Your Freakin’ Face.”

As Randy has said, “There’s so much fake news out there about me. I can’t wait to set the record straight and finally give people a peek behind the green screen.” And set the record straight he does. Playing with Myself is a first-hand account of the journey that led Randy Rainbow from his childhood as the over-imaginative, often misunderstood little boy who carried a purse in the second grade to his first job on Broadway as the host at Hooters and on to the creation of his trademark comedy character. In chapters titled “Pajama Bottoms” (a look back at the days when he wore pajama bottoms on his head to pretend he was Dorothy in The Wizard of Oz), “Yes, It’s My Real Name, Shut Up!” (no explanation necessary…) and “Pink Glasses” (a rose-colored homage to his favorite accessory), Playing with Myself is a memoir that answers the question “Can an introverted musical theatre nerd with a MacBook and a dream save the world, one show tune at a time?”

Memoirs are not my preferred genre, but when I heard that Randy Rainbow was releasing a no-holds-barred story of his life, I couldn’t wait to get my hands on it, given that I’ve been a fan of his musical political parodies from the beginning.

Like the man himself, this book was so much fun! I enjoyed learning about his childhood, his family, his struggles with depression, his inspiration, his missteps, and his eventual rise to stardom. I was also surprised to learn that Randy Rainbow is his real name – who could have guessed?

I swear Randy Rainbow is the only person who can make the story of one’s childhood enjoyable and enthralling. And if you’re a fan of celebrities, Randy does plenty of name-dropping throughout the pages, and I enjoyed learning about his relationships with various actors, actresses, and musicians.

I loved getting a behind-the-scenes look at his process — how he comes up with ideas for and makes his videos. It also becomes clear that his rise to fame was the result of a lifetime of hard work and preparation. Though there is a serious aspect to the book, especially regarding self-image issues and bullying, overall, it’s humorous, light-hearted, and fun, peppered with witty asides, enjoyable banter, and jokes. I caught myself laughing out loud so many times as I read about his compelling life.

Frequently, I find memoirs to drag in places where I need to slog through them painfully. Not this one. Playing with myself was a hoot from beginning to end! All in all, I found this book utterly delightful, and it gave me a new appreciation for Randy Rainbow. It was a blast getting to know the man behind the pink glasses. If you enjoy his creative video spoofs, you should enjoy this funny yet heartfelt book. It’s a refreshing and entertaining read about one of my favorite people.

A huge thank you to Netgalley and St. Martin’s Press for providing a review copy of this book.

This title will be released on April 19th but is available for preorder now.

Purchase Playing with Myself from Amazon