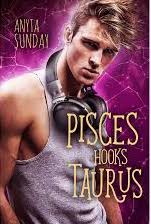 This is at the fourth book in the Signs of Love series by Anyta Sunday. I actually started with book two in this series, Scorpio hates Virgo and I loved it so much a went out and got the rest of my series. I’m really a fan of this author and have now read several books by her. She writes gay romance book and many people refer to her as the “Queen of Slow Burn” because she specializes in the slow burn romance. I think that’s why I enjoy her books so much because I love this trope. She also does the enemies to lover trope in some of her novels which I also really enjoy.

So onto Pisces Hooks Taurus. The story follows Zane, a Kiwi who has a month left on his Visa before he’s shipped back from the US to New Zealand. But he wants to stay in the US more than anything especially because he wants to stay close to his brother and his brother’s wife who is also his best friend and the two of them have just become parents. So Zane has a plan: he will find the perfect girl of his dreams on one of his dating apps, fall in love, marry her and get to stay in the states. That’s the plan, anyway. Oh, and all this is to take place within 30 days.

But first off, he needs to find another place to stay and asks a friend of his brother’s wife, a professor named Beckett, if he can crash with him temporarily. So what follows is a delightful slow burn romance between the two of them. But it’s not an easy road. Zane is clueless that his so-called “Bromance” with Beckett may be something more profound and we learn that Beckett is still broken-hearted and deeply scarred from a past relationship and is determined not to get his heart broken again.

I really loved both of their characters. Zane, our Pisces is young, naïve, romantic, and somewhat of a dreamer, so in this way, he comes across as quite innocent. He is also charming and super-sweet. Beckett, our Taurus, is mature, more serious, intellectual and studious though somewhat insecure and mistrusting of others following that horrible breakup.

So it was a delight watching the slow-burn between the two of them as Beckett would continuously erect borders with our clueless Zane unknowingly tearing them down. What I liked is the balance in the story. We have two very different personalities; a totally innocent and naïve character and one who’s jaded and mistrusting. As the tension builds, we see our bull lowering his guard and our fish growing in maturity and wisdom. I also loved how much both of these characters grew by the end of the story.

All in all, I felt that this slow-burn romance was realistic and heartfelt. It was a story full of banter, humor, affection, the building of tension as these two men realized their attraction to the other, and the blossoming of love, without too much angst.

I found it interesting that though Zane was initially searching for the perfect woman, his falling in love with Zane didn’t strike me as a gay-for-you trope, one that I typically don’t like. Rather, it felt like Zane’s bisexuality naturally unfolded as true affection developed between him and Beckett. Actually, I got the impression that Zane didn’t really experience sexual attraction to someone unless he has a strong emotional connection with them. So in this way, he struck me as possibly being more demisexual rather than bisexual.

Pisces Hooks Taurus was another lovely and sweet story by Anyta Sunday that made me a little misty-eyed at the end (as do most of her books). It’s the kind of story that makes you laugh and cry, and really ends up tugging at your heartstrings. Excellent plot, with lovable characters, endearing meddling family and neighbors, plenty of humor and snark and a sweet romance with a couple of steamy scenes thrown in at the end. It’s a story in which both of our characters knew what they wanted — it just took them some time to get there.

I’m loving this series and can’t wait to read the next book.