You are here: Home / YA Contemporary / Review of Perfect Ten by L. Philips 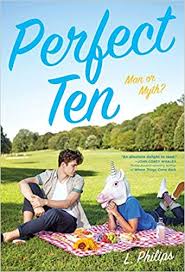 Perfect Ten follows Sam Raines, who after having broken up with boyfriend Landon, two years prior, is lonely. He’s ready to find a new boyfriend, but that’s not an easy task given that there’s only one other gay kid at his school that he knows of. His best friend Meg, who is a Wiccan, offers to perform a love spell for Sam. All he has to do is make a list of the top ten traits that he wasn’t his new boy to have and then petition the Goddess.

Now Sam is not a believer in Meg’s religion but decides to give a go, figuring his love life could use all the help it can get. So in a midnight cemetery ritual involving candles, the elements and a spell recited in Latin, Sam burns his list, thus sending out his intent to the universe. Much to Sam’s surprise, the spell seems to have worked — but not quite in the way he’d hoped. Instead of bringing one perfect guy to his doorstep, the spell brings three of them. There’s Gus, the debonair and swoon-worthy new French exchange student; Travis, the super-sexy and flirtatious bisexual rockstar with a huge heart; and Jamie, the adorable angelic-looking artist whose face lights up every time he sees Sam. Oh, and there’s also Sam’s ex-boyfriend Landon who still seems to hold a special place in Sam’s heart causing Sam much confusion.

As it turns out, all of them make a play for Sam’s heart, and now all Sam has to do is choose.

First off, I love the cover. It was eye-catching, aesthetically pleasing and super-cute, letting us know that we’re in store for a sweet and fluffy read.

I was in the mood for something that wasn’t too heavy, and this book fit the bill. It was a fun blend of teen romance with a tad of magical realism thrown in resulting in a swoony young adult romantic comedy. It was fun journeying along with Sam who, wanting to explore his options, struggled to choose a new boyfriend from several equally charming contenders. But of course, it’s not as easy as it sounds leading to much drama and both romantic and sexual tension, all of which renders the story compelling.

For the most part, I liked Sam’s character though there’s no denying that he is flawed like the rest of us and ends up making some stupid mistakes. But he felt realistic to me. He was so caught up in the idea that he now had romantic options that he felt that is was okay to “date around” a bit until he made his decision. Not surprisingly, Sam learned that not everyone was okay with this. Lesson learned. But still — I found it refreshing and fun to read a story featuring a teen who had multiple suitors.

I liked the secondary cast of characters and also found them relatable. I especially enjoyed the friendship between Sam, Landon, and Meg and felt that the events in their relationship demonstrated the ups and downs of friendship nicely, especially how loyalties become tested from time to time. I felt that Landon and Meg were believable, well-developed characters, both of which I could relate to. I also liked how Meg’s and Sam’s dating life and romantic interests led to several interesting and frank discussions about love and sex.

That being said, I did like the inclusion of Wicca in the story and thought that the author did an excellent job of representing Meg and her involvement with the Wiccan religion in a respectful way. This was especially evident when Meg, explaining her religion says:

“The great thing about Wicca is that you don’t need to use any fancy spells or words if you don’t want to. You just have to speak from the heart.”*

On that same note, I did enjoy the representation in the book. We had several gay characters and at least one bisexual character. I also loved how much of the story focused on art. Sam was a writer (though I don’t recall him having actually written anything), Travis was a musician, and Jamie was an artist, and it was through their creativity they all connected, which really resonated with me.

I thought the ending was well done and enjoyed how it all turned out, especially given that there was a huge “fake-out” at the end. The conclusion was romantic and satisfying, with a HEA.

One of the main things that I disliked was how the French foreign exchange student’s dialog was written phonetically. I hate it when authors try to write an accent or a dialect in this way, and it rarely works. It certainly didn’t here, and I found it super annoying. I also felt that the author resorted to negative stereotypes in the portrayal of Gus, portraying him more like a French caricature than a person.

While I did find Sam likable (mostly), there were some things about his character that bothered me. He was at times almost over-the-top shallow and self-centered, and he struck me being oblivious to the feelings of others. He often didn’t treat the people in his life all that well. I recall a couple of scenes in the book in which he shames Meg into not losing her virginity with her boyfriend though he regularly had sex with Landon while they were dating. I felt he could as supported her a little better and at times, he didn’t feel like he was a very good friend.

Okay, maybe it’s just me, but I’m surprised that nobody had an issue with 21-year-old Travis trying to get 17-year-old Sam in bed. In fact, just about every conversation between Travis and Sam revolved around sex. I just found it surprising that none of Sam’s friends took issue with Travis’s age, especially considering that it is illegal in most states for an adult to have sex with someone who’s underage.

In spite of our main character being a tad bit too self-centered, I thought that Perfect Ten was a sweet, lighthearted gay romance that I overall enjoyed. In fact, I read the book in a couple of sittings because I couldn’t put it down, so that says something about its strength as a story. I especially enjoyed the heart-warming conclusion that gives you all the right feels so in this way, it was quite an engaging story. I probably would give this one 3.5 stars.