You are here: Home / Middle Grade / Review of Percy Jackson and the Olympians Book 2: The Sea of Monsters by Rick Riordan 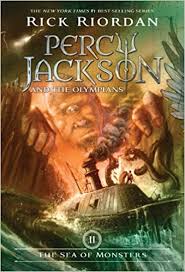 Families are messy. Immortal families are eternally messy. Sometimes the best we can do is to remind each other that we’re related, for better or worse … and try to keep the maiming and killing to a minimum. Hermes

This is the second book in the Percy Jackson and the Olympians series, and I enjoyed this book as much as the first.

The Sea of Monsters opens a few months after the events of the first novel with our favorite half-blood making an admirable attempt to fit in as school — or at least, not to destroy the school. He ends up befriending a massive, unpopular teenager named Tyson. He’s feeling pretty smug about making it almost through the entire school year without getting expelled when cannibalistic monsters attack Percy during gym class, and the whole school ends up pretty much destroyed.

Then Percy gets word that there’s big trouble at Camp Half-blood so against his mother’s wishes, he, along with Tyson, (who is actually a Cyclops as it turns out) and Annabeth, rush to the camp to help. There, Percy learns of a diabolical plan to destroy the camp. Someone has poisoned the pine tree which strengthens the magical boundary surrounding the camp and with the boundary weakened, monsters are at the borders attempting to break in. There is only one possible way to reverse the poisoning and restore the boundary, and that is to obtain the Golden Fleece.

After being encouraged by one of the gods (who has an ulterior motive), Percy among with Annabeth, the daughter of Athena and Tyson our friendly Cyclops, head off on a quest to retrieve the Golden Fleece from an evil creature named Polyphemus who, as it so happens, is also holding Grover (a satyr and Percy’s friend) hostage. It’s also worth mentioning that it’s very likely that Polyphemus will end up eating our poor Grover in the coming days.

Of course, there are those who don’t want them to succeed, so the trio has to overcome all sorts of obstacles before finding the fleece, including new enemies and an old arch nemesis.

I loved Percy Jackson’s character, and I enjoy how he grows and matures in each book. He’s now much more confident than he was in the first book though his insecurities do come through occasionally. But in spite of his uncertainties, I find him delightfully sarcastic, witty and humorous, all of which comes through in his narrative. He’s also a flawed character who does his fair share of screwing-up during the story. He’s often gullible and seems to fall for almost every trap placed in front of him, but somehow, he always manages to redeem himself at the end. In this book, we see an internal struggle as Percy reconciles his reputation and his need to be respected by his peers against his need for family, specifically his unpopular newly-found sibling.

I also loved Tyson, the newest character in the series. He comes across as being utterly innocent and sweet, yet also resourceful. By the end of the novel, I couldn’t help but love this sympathetic character. His character also helped deliver one of the more powerful messages of the book: how it’s important to accept other people no matter who or what they are, and how we cannot always judge by appearances alone.

Like the first novel, this book consisted of non-stop action which I loved! Percy, Annabeth, and Tyson, our resilient trio, ended up in one challenging situation after another, each time using their wits and talents to overcome and get back on track.

I also enjoy meeting all the new gods and creatures that are presented in each book. In this book, for instance, we get introduced to a new mythological creature, the adorable hippocampi who has the upper body of a horse and the lower body of a dolphin, the deadly Sirens, the three taxi-driving eyeball-sharing Fates, and the witch, Circe who has an unusual penchant for guinea pigs. Of course, old enemies appear as well. Reading these novels is an excellent way to learn about mythology. I also felt that this novel added a lot more depth to the characters to whom we were introduced in the first book.

One thing I can think of that wasn’t quite up to par in this book was Luke’s character. He could have been built up a little more, given a little more depth perhaps. I’m also not entirely sure that I’m buying into his motivations which do seem a tad on the weak side. That being said, I look forward to seeing more of Luke’s puppet master in upcoming books — the big bad Chronos.

Another thing that I noticed while reading this book was that Annabeth’s character reminds me way too much of Hermione Granger from Harry Potter. It seems she has that same “little-miss-know-it-all” attitude which I find a touch annoying. I think I might have enjoyed a little more depth to and a little different spin on her character.

Mostly, however, there was not a lot that I disliked about this novel.

Like the first book, The Sea of Monsters was a fun, exhilarating, fast-paced story with witty dialog and non-stop action, and I love the world that Rick Riordan has created here. The action is unrelenting, and the characters never lose their endearing humanity. There was a strong theme of friendship and family that ran throughout the novel which really resonated with me. All in all, this was a playful and rollicking book populated with lovable, memorable characters that kept me turning the page until the stunning ending. I can’t wait to read the third book!

Purchase the Sea of Monsters on Amazon

Purchase the Sea of Monsters on The Book Depository