You are here: Home / Fantasy/Urban Fantasy / Review of My Life As a White Trash Zombie by Diana Rowland 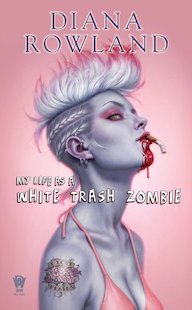 I was in the mood for something crazy and fun, and this book fit the bill. Plus I loved the cover!

My Life as a White Trash Zombie follows Angel, a 21-year-old pill-popping, high school dropout who lives with her alcoholic father. She’s also a convicted felon for car theft (though it wasn’t her fault) and she’s now on probation.

One day, she waked up in the ER. The doctors tell her that she had just suffered a near-fatal overdose of painkillers. The funny thing is that Angel remembers being in a horrible car accident, covered in her own blood but at it turns out, there’s not a scratch on her. Authorities also told her that she was found naked on the side of the road, which also made no sense to her, though to be truthful, her memories of that night are still somewhat sketchy.

Things even get weirder when she receives an anonymous letter telling her there’s a job waiting for her at the morgue. Given the way her life has been spiraling downward recently, she doesn’t dare to refuse the job, especially given the note warns that if she fails to hold onto the morgue job for a month, her toxicology results will be shared with her probation officer and she’ll end up going to jail.

On top of that, the anonymous note author gave her a supply of strange energy drinks, and the note told she must drink one of them every other day. As her supply of drinks dwindled, she receives another note, telling her, “If you crave it, eat it.”

The thing is, is that recently Angel has been craving brains. During an autopsy, she found her mouth began watering and her stomach grumbling at the mere smell of brains. They smelled….delicious!

She finally gives in to her cravings one day and finds that eating brains gives her a rush that her pills ever did.

Because of her new habit of eating brains, she can only come to one conclusion: Somehow she has been turned into a zombie. It’s only when she meets another actual zombie, and he confirms her suspicions.

So the question is: who turned her and why?

So the rest of the book follows our young newbie zombie as she struggles with her new and improved self, falls in lust with a hunky policeman, tries to keep her secret from loser boyfriend, gets in a couple of rows with her alcoholic dad and surprisingly, finds that since becoming a zombie, she’s changed more than just physically. She also grown as a person and now sees that there’s a lot more to life than pills and booze. In fact, her life is the best it’s ever been, brain-eating aside.

It’s fun to watch her as she learns her limits and adjusts to her new zombie powers. She also ends up being quite a resilient character.

But life as a zombie isn’t all smooth sailing for Angel. There’s a serial killer on the loose who’s been decapitating his/her victims and keeping the heads…which of course, means fewer brains for Angel are showing up at the morgue. But things heat up even more when she and the serial killer cross paths, leading to a riveting climax!

So I ended up loving this book. It was so much fun! I can’t tell you how many times I laughed out loud. It was snarky, funny, irreverent, unique and all around fun read. It also had a unique take on zombies which I really enjoyed, and there was even a mystery to solve.

The story was nicely wrapped up at the end with a completely satisfying ending. This just might be my new favorite zombie book, though I did enjoy Warm Bodies as well. As for the dialog, it was amazing, and there were so many lines caused me to crack up.

A truly fun romp of a book with great witty banter along with likable characters, a gripping plot, a little romance, a serial killer, a touch of redemption and ….zombies… made this a ⭐⭐⭐⭐⭐ read for me.

Purchase My Life As a White Trash Zombie from Amazon