You are here: Home / Mystery/Suspense / Review of Murder at Union Station by David S. Pederson 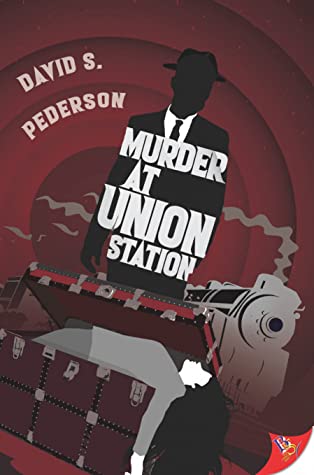 At close to midnight in the Union Station baggage room, the air is hot, still, and thick. The eleven forty-five Golden State Limited to Los Angeles is approaching rapidly when the baggage handler, Alfred Brody, notices a stray hound dog sniffing around one of the steamer trunks. The horrific discovery of a body inside the trunk can mean only one thing: there’s a murderer among them.

The young woman was certainly murdered, but who did it, and why? Suspects and motives abound as Private Detective Mason Adler investigates. He soon realizes that nothing, and no one, are what they seem to be as he races to uncover the truth and bring the real murderer to justice without becoming the next victim.

This was the third novel by David S. Pederson. Unlike the other two I read, which featured Heath Barrington as the main character, the protagonist in this novel is Private Detective Mason Adler, a 50-year-old gay detective. The story takes place in 1946 in Phoenix, AZ, where the dead body of a woman is discovered in a trunk at Union Station. What’s interesting about this tale is that it’s inspired by a real-life murder in 1931.

In Murder at Union Station, Mason is hired to investigate the woman’s murder, and we travel with him as he interviews the various witnesses and suspects, trying to piece together the last hours of the woman’s life. The story is full of engaging, lively characters such as his sassy next-door neighbor Lydia and the flamboyant Walter as well Emil, the by-the-book police chief with whom Mason has an interesting — and somewhat contentious — working relationship. There was plenty of comical, witty banter between the characters, which lent a fun touch to the story. I also enjoyed the diversity in the novel, which one doesn’t always find in historical fiction: Mason and his friend Walter were both gay, two of the women in the story were a lesbian couple, the porter who transported the body to the station was a Black man, and one of the suspects was neurodiverse.

It was a lot of fun to unravel the mystery of what happened to the poor woman in the trunk as Mason gathered a plethora of clues from the colorful witnesses. Murder at Union Station is well-written, suspenseful, and smoothly plotted, and it kept me guessing until the big denouement at the end. It’s a fast, enjoyable cozy mystery that I enjoyed. I look forward to reading the first book in the Mason Adler series — Murder on Monte Vista. Recommended!