You are here: Home / Mystery / Review of Murder at Pirate’s Cove by Josh Lanyon 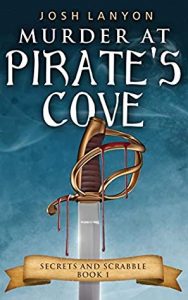 Murder at Pirate’s Cove is a cozy mystery that follows our main character Ellery Page who has inherited a failing bookstore and a somewhat crumbling mansion, both located in the seaside village of Pirate’s Cove. Ellery, who is determined to make a fresh start in his life after a particularly bad break-up in New York, takes on the challenge of turning the bookstore into a profitable venture.

One night on his way home from dinner, he notices a light on in his bookstore. When he stops to investigate, he discovers a dead body on the floor, and, as it so happens, the victim, Trevor Maples, is a man with whom Ellery had been arguing only hours earlier at his store as witnesses can attest.

The handsome yet gruff police chief Jack Carson investigates and doesn’t hesitate to let Ellery know that he is the prime suspect in the case. Even though Ellery isn’t a detective, he takes it upon himself to investigate Trevor’s murder in order to prove his innocence, much to the chagrin of Chief Carson. The task proves more difficult than first Ellery first imagined given that pretty much everyone in Pirate’s Cove disliked Trevor, and many of the residents have their own secrets, hidden motives, and reasons for wanting the man dead.

I typically don’t read Cozy Mysteries as they aren’t my favorite genre, but given that I tend to enjoy this author’s work, I wanted to check it out — and I’m so glad I did. This story was not only fun but also gripping and kept me turning the page until the big reveal at the end.

The story is populated with delightfully eccentric and zany characters/suspects that made reading this so much fun. I especially loved Ellery’s character and found him to be much more relaxed and less stuffy than some of the characters in the author’s other mysteries (Adrian English comes to mind). Though certainly impulsive and flawed, I found Ellery to be relatable and endearing as well, and going through the same struggles as many of us are. I found Ellery to be a breath of fresh air.

As this is a Cozy Mystery, there is no violence or sex on-page, so this is a perfect book for those who don’t like their mysteries too gory or too sexy. And though Lanyon typically writes M/M Romance, you won’t find much of that here. However, there is a heated energy between Ellery and Jack, hinting at the budding of a potential relationship in future books. But any attraction between the two characters takes a back seat to the main plotline of who murdered Trevor Maples.

All in all, I found Murder at Pirate’s Cove to be a delightful and well-crafted mystery that kept me guessing until the end. What an unexpected gem this turned out to be! It was so much fun solving this mystery along with Ellery and Jack, and the excellent writing makes for a seamless reading experience. There’s just enough tension and drama to bring the story home to a pretty compelling and satisfying conclusion, and I look forward to reading future books in this series.