You are here: Home / Fantasy/Urban Fantasy / Review of Mistborn: The Hero of Ages by Brandon Sanderson 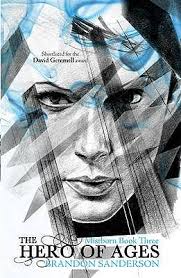 So I finally finished the third book in the Mistborn trilogy and wow, what a ride that was. It’s been several years since I’ve read a huge, epic, sweeping fantasy and I was just blown away by this one.

There’s so very little I can say about this book without giving anything away except that the world is dying and dying quickly and that the Emperor and his wife are tricked into releasing an evil entity who is hell-bent on destroying the world. Now it’s up a brave few to try and stop the creature — that is, if it isn’t already too late.

The Hero of Ages was superb though it completely destroyed me and wrecked. The bittersweet ending was both a thing of absolute beauty as well as heartbreaking. It’s one of those situations where you’re outrageously happy and completely devastated at the same time, and though it wasn’t all rainbows and unicorns, the ending felt right to me, which is quite a feat for an author to pull off. And just to be clear, there were no unanswered or unexplained questions at the end of this trilogy so, in this way, the conclusion was satisfying.

This series had amazing characters with a super kick-ass heroine whom I adored. The characters grew to be so much more than they had ever dreamed possible and their growth throughout the arc of the story was phenomenal: Elend, Vin, Sazed, Spook — even the Kandra. What I loved about this novel was the message that people are neither good nor evil, and even those whose actions appear to be evil and malicious in nature, may not entirely be so, once we dig further down to unearth the truth. There is also the theme of “nothing is as it seems” which happens to be one of my favorite tropes.

There are so many characters that I grew to love in this story, and at around 2,000 pages, it’s going to be difficult for me to leave them behind. I’m pretty sure that I’m going to be thinking about this story for a long time to come. Now there is another Mistborn trilogy referred to as Mistborn Era 2, so I do get to return to this world. However, I do believe it takes place 300 years after the first trilogy, so there’ll no doubt be new characters for me to love.

Purchase The Hero of Ages at Amazon

Purchase Hero of Ages at The Book Depository