You are here: Home / Fantasy/Urban Fantasy / Review of Mistborn 1: The Final Empire by Brandon Sanderson 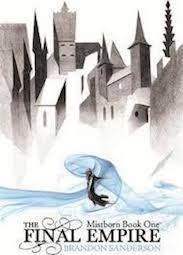 This is the first book in the Mistborn trilogy, which is an epic high fantasy series by Brandon Sanderson. I’ve kind of rediscovered my love of fantasy recently. When I was a kid, I read hundreds of Fantasy and Sword & Sorcery novels, so it’s been a lot of fun to dive in once again.

So The Final Empire takes place in a dystopian world that has been ruled for a thousand years by the Lord Ruler who is believed to be immortal and who governs by absolute power and terror. His empire is referred to as The Final Empire.

In this grim world, ash continually falls from the sky, the sun is glowing red, and there are no flowers or grass. There are two groups of people: The nobility, who are under the Lord Ruler’s thumb and the Skaa, who are more or less peasants and who have lived in slavery, misery and fear ever since the Lord Ruler took power, and who are often killed without cause by the Lord Ruler’s enforcers or by their Noble overlords. So the lives of the Skaa are pretty much that of constant terror.

For them, all hope is lost. Or is it?

But the main characters in this story are a group of misfits who are trying to overthrow the Final Empire, led by a man named Kelsier.

Now Kelsier is a legend in the underworld – a masterful thief who could pull off any heist, that is until the Lord Ruler caught him and sentenced him to the Pits of Hathsin — a place from where nobody has ever escaped alive.

But escape Kelsier did, and when he did, he recruited underworld’s elite.

**The magic system in this world is called Allomancy and is quite impressive. **

It’s a system in which you ingest different types of pure metals and then “burn” them by will in order to temporarily gain enhanced abilities such as increased speed, super hearing, and enhanced strength. For example, you “choose” to burn copper and you do.

Some of these metals can allow you to almost fly through the air or fire objects with the speed and strength of bullets.

The majority of Allomancer’s are called Mistings and have the ability to burn only one metal and one metal only. But there is a rare and special type of Allomancer called a Mistborn who can burn All the metals, so these are indeed truly powerful individuals, nearly unstoppable.

As we learn, Kelsier is a Mistborn. So he has brought together the smartest and most trustworthy Allomancers, with the goal of taking down the Lord Ruler, a more or less suicidal task.

Introducing Vin – A Street Thief with a Huge Secret

Kelsier ends up recruiting a young woman named Vin, a street thief, who has been abused and betrayed by everyone she’s met.

But as it turns out, the girl has some impressive powers of her own and Kelsier takes it upon himself to bring them out. But she’ll have to learn to trust him first — not an easy task.

So the rest of the story revolves around the ragtag crew of misfits who have undertaken the impossible. We dive head-first into this strange and unsettling society as we see their plan unfold with the huge question: How can you defeat the undefeatable? And what will be the price to try?

The world-building was phenomenal, and The Final Empire had the most creative and meticulous magic system I’ve ever come across in fantasy.

Allomancy was fascinating, and I loved the depth that the author went into in describing it.

And the world was delightfully creepy, yet mesmerizing

The world itself was also enthralling, with the dreadful Lord Ruler and his terrifying order of Steel Inquisitors, also believed to be immortal, with steel poles through their eyes; the frightening mists that took over the city every night; the mysterious origins of the immortal Lord Ruler; and the dead-yet-alive mist-wraiths that lived in the mists.

It’s a chunkster but well worth the effort!

I was a bit hesitant to start this book because it was a chunkster, coming in at 647 pages but once got started, I tore right through it.

This book had a masterful intricate plot, a group of true badasses, a powerful yet damaged heroine who turns out to be quite lethal to her enemies, rich dialog and banter, an awesome magic system and amazingly developed characters that I ended up falling in love with.

I loved The Final Empire so much that I immediately picked up the second one in the series and I’m over halfway done with it — and it’s longer than the first one.