You are here: Home / Fantasy/Urban Fantasy / Review of Mark of Amulii by Aeron Dusk 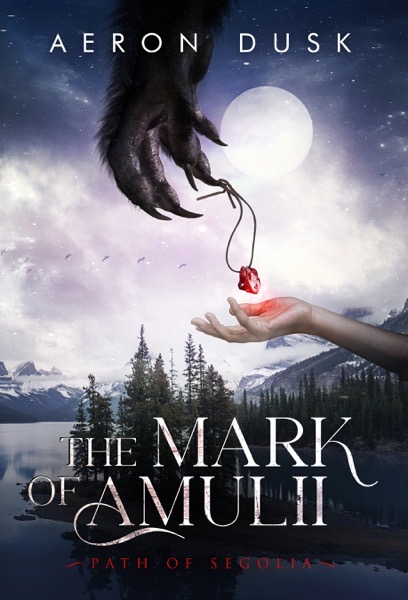 Alexander Hunt holds onto two secrets: both could ruin his life, but one could end it.

The sudden move from Calgary, Alberta to the outskirts of Jasper during his senior year leaves Alex isolated in a cabin with bickering parents. He copes by taking daily hikes along the shores of Maligne Lake until he meets a young man named Amulii. He’s huge, unkempt, and speaks broken English, but there’s something else uncanny about him Alex can’t quite place.

What starts as a frightening first encounter escalates the moment Amulii gives Alex a strange gift and reveals there’s something much wilder about him than meets the eye. Unbeknownst to Alex, this sets off a series of devastating events that sends both of them fleeing from an aggressive, well-armed militia in the forest.

As Amulii and Alex escape into the mountains, their bond strengthens as they learn from one another, and what was once distrust evolves into something much deeper. Despite that, there are only two questions burning Alex’s waking thoughts as they traverse the harsh wilds of western Alberta, waiting for salvation: will he be caught and killed, or will he lose the rest of his humanity to Amulii’s mistake?

This book is NOT erotica but is intended for those over the age of 17. It contains explicit sex and graphic violence. While those themes are not prominent in the story, they pop up from time to time. This is a gay-centric paranormal romance with real biped werewolves. This is NOT A/B/O

I’m a huge fan of werewolf novels, and I really enjoyed this author’s take on the genre. I loved our two main characters, Alex and Amulii, and enjoyed seeing both of them transform (pun intended) and grow throughout the story. This novel was quite a refreshing take on the werewolf mythology, and I thought the world-building in this story was phenomenal, as was the character development. The author gives us a truly fascinating world populated by memorable, well-developed characters.

Perfectly paced, The Mark of Amulii is a fast-paced fantasy adventure, and the action never lets up. Once Alex and Amulii are on the run, the story shifts from a mild romance into an intense, sometimes brutal, no-holds-barred thriller dripping with adrenaline. I found myself swept away in its action-packed wake, almost gasping for breath as the tension tightens like a noose, right up to the thrilling — and utterly shocking — conclusion.

The story is twisty and powerful, as well as moving. Though action-packed, the heart of the story is the romance between Amulii and Alex, and the chemistry and passion between them are fantastic. I enjoyed seeing their barriers break down as they got to know each other and how perfectly they balanced each other out. In addition, the character interaction was top-notch.

All in all, The Mark of Amulii is a razor-sharp novel that combines queer themes with a paranormal element in a clever and twisty way, with plenty of manic action and heart-stopping suspense. Right from the initial scene-setting, the novel builds to a crescendo of thrills, chills, and surprises and does not disappoint. In addition, the author left an intriguing tidbit at the end of the story, opening the way for a possible sequel. I hope there is one because I would love to read more novels that take place in this world.

A huge thank you to the author for providing a review copy of this book.

Purchase The Mark of Amulii from Amazon