You are here: Home / Suspense/Thriller / Review of Look Closer by David Ellis 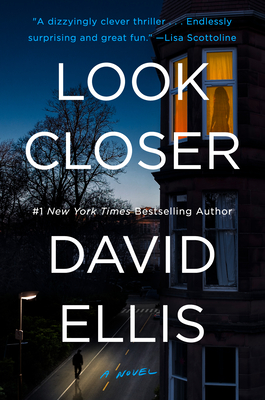 Simon and Vicky couldn’t seem more normal: a wealthy Chicago couple, he a respected law professor, she an advocate for domestic violence victims. A stable, if unexciting marriage. But one thing’s for sure … absolutely nothing is what it seems. The pair are far from normal, and one of them just may be a killer.

When the body of a beautiful socialite is found hanging in a mansion in a nearby suburb, Simon and Vicky’s secrets begin to unravel. A secret whirlwind affair. A twenty-million-dollar trust fund about to come due. A decades-long grudge and obsession with revenge. These are just a few of the lies that make up the complex web…and they will have devastating consequences. And while both Vicky and Simon are liars, just who exactly is conning who?

Part Gone Girl, part Strangers on a Train, Look Closer is a wild rollercoaster of a read that will have you questioning everything you think you know.

This was probably one of the twistiest books I’ve ever read, and because of that, I really can’t say too much about the plot without delving into spoiler territory.

So many times, I thought I figured it all out, only to discover that I was utterly wrong once again. This is one of those stories where nothing is as it seems, nobody is who they seem….hell, nobody even is who they claim to be. I learned pretty quickly that I couldn’t trust anyone in the story as every character was manipulative, devious, and conniving, which made the novel devilishly delightful. So many secrets….so many lies. After a while, I wasn’t quite sure who I should be rooting for.

The suspense in the story is unrelenting. This is one of those edge-of-your-seat thrillers that keeps your heart pounding as you turn the page. There is so much going on here with murder, infidelity, thievery, huge lies, betrayal, enormous secrets, hidden identities, and more — an intricately plotted web of misdirection and secrets. The author is a master of meticulous plotting, that’s for sure.

This book restored my faith in domestic thrillers. I’d stopped reading them for a while because so many of them were predictable and underwhelming. Not this one! It is one of the least predictable thrillers I’ve ever read. Told from multiple perspectives and multiple timelines, the relationship dynamics between the characters are incredibly complex. It is one of those books where you must pay careful attention as you read, as there are so many moving parts. But the payoff is definitely worth it. It is so deliciously sinister!

Look Closer is a thrilling, topsy-turvy mind-blowing ride from start to finish, with intersecting plot lines from both timelines, phenomenal characters, and so much suspense that you’ll be flying through the pages. It’s an utterly satisfying read — the kind where I had to lean back and attempt to catch my breath after I turned the last page. It’s so addicting that you need to finish almost as soon as you begin. David Ellis is a new author for me (how did I not know about him????), and I now plan on reading all his work. It’s been a while since I’ve given a thriller five stars, but this one gets all of them!

A huge thank you to NetGalley for providing a review copy of this book.