You are here: Home / Fantasy/Urban Fantasy / Review of Like Silk Breathing by Camille Duplessis 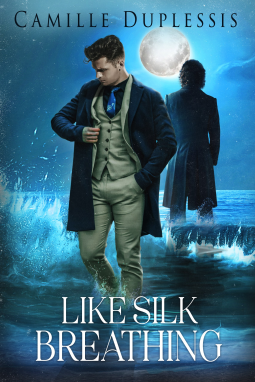 When Tom Apollyon returns to Cromer to help oversee his uncle’s pub, it’s a difficult adjustment. Overwhelmed by his born ability to sense auras, Tom relies on constant drinking and drifting to function normally. Coming back is too much to handle and one night, he decides to end it all. He just doesn’t expect to encounter a bewitching stranger when he tries.

While on an annual seaside holiday with his lover, Theo Harper takes a solitary evening stroll near the water. He thinks it’s just the thing a landlocked selkie needs, yet instead of being soothed, he stops a troubled man from drowning. The earnest good deed sparks a romance that makes Tom and Theo hope for a happier, gentler life together.

While both need to decide to trust themselves and each other, they’re not daunted until an alarming problem presents itself. Theo’s skin — which can definitely be used to capture or kill him, to Tom’s horror — has gone missing.

To build the future they want, they have to get the skin back…

The gay fantasy novel was right up my alley. I loved the relationship between Theo, a Selkie, and Tom, who has a touch of witchiness inside of him in that he can see people’s auras. I enjoyed how they brought out the best in each other, and I loved journeying with them as they got to know each other and understand each other. The supernatural elements in the story were a lot of fun, and just about everyone in the story had a touch of the supernatural to them, whether they knew it or not.

I tend to enjoy stories involving mythical creatures and felt the Selkie aspect of this was exceptionally well done, especially once Theo’s skin goes missing and the two of them together take on the quest to find it. Of course, as the reader, we know what happened to the skin, which makes it all the more enjoyable.

Initially, I wasn’t quite sure of the time period where the narrative takes place as the prose felt like a book written in Victorian times. However, at one point, a character mentions it’s the 20th century and that being gay is still considered a crime, so I’m guessing it took place at the beginning of the century (if the time period was ever mentioned, I missed it).

Like Silk Breathing was a subtle blow-me-away kind of book that got its hooks in me quite quickly and even moved me to tears in a couple of places. This was a lovely and eye-opening story about letting go of one’s prejudices and seeing beyond what is there. I found it to be as thought-provoking as it is emotional. Furthermore, it is utterly enchanting and a hell of a treat for anyone who enjoys good yarns with believable characters and a healthy dose of the supernatural. Though there are only a handful of people in the story that really matters, their characterization is really well done. As a reader, it’s easy to identify with almost all the characters in the story.

This beautifully written tale, with its lush prose, takes the reader into a delightful new fantasy world, and I adored the time I spent there with these characters. It’s an engaging, quiet, and gentle story, yet it pulled me through the narrative wonderfully.