You are here: Home / LGBT Romance / Review of Liam Davis and The Raven by Anyta Sunday 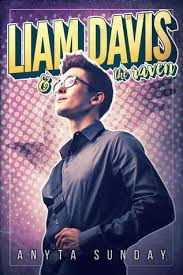 Anyta Sunday is one of those authors that I get all gushy over. In fact, in the M/M genre, she’s an insta-buy author for me.

Liam Davis and The Raven is a New Adult M/M Romance that follows Liam Davis, a serious student journalist writing a political column for the campus magazine called The Scribe. His goal is to eventually to gain apprenticeship at his father’s firm, so his life is almost totally focused on his career in journalism. Much to his horror, the editor of The Scribe forces him to relinquish his politics page and reassigns him to The Party Page. Now, this is problematic because not only does it jeopardize his chance of getting into his father’s prestigious newspaper company, but being an extremely serious non-nonsense and no drama type of guy with no friends to speak of, he basically has no idea how to party much less write about it.

But one night when leaving the party, a person dressed as Freddy Krueger comes stalking out of the shadows and attacks him. Luckily the Raven, who is the campus vigilante comes to save the day. Now what’s interesting, is that this vigilante has been getting hate mail sent to Scribe’s opinions page and now Liam takes it upon himself to find out who the Raven is so that he can warn him of the potential danger.

Along the way, due to his Raven research and his new party-going agenda, he ends up making some friends – and someone who may turn into much more than a mere friend. So in this way, this book is a sexual self-discovery tale in which Liam begins to question his own sexuality though he hasn’t given it too much thought.

What I find interesting about Liam, is that he is blunt, honest to a fault, insensitive, standoffish, a tad detached and clinical even – with absolutely no social skills whatsoever but with a keen, critical eye for observation. Though it took me a bit to warm up to Liam — and I really did — he ended up being quite an endearing characters, and I loved his deadpan humor. It was also lovely to watch his sexual awakening as he began to have deep feelings for a someone — in this case a boy — for the first time ever. The entire book is told from Liam’s POV which made the story all the more fun.

Along the way, he amasses several delightful and lovable characters as friends: there’s the dreamy Quinn who takes Liam under his wing and even agrees to become his roommate, the sexy and hysterically funny Hunter who is disabled and in a wheelchair following a brutal gay bashing though that certainly doesn’t stop him from actively pursuing his latest crush, and then there’s Shannon, Hunter’s overprotective sister.

So in this book, Liam not only discovers love for the first time but also true friendship and devotion within friendship.

True to Ms. Sunday’s form, there is a romance in this story, but of course, it is an extremely slow burn one, my favorite trope, to be truthful. I loved watching Liam’s evolution from a clinical social misfit to a passionate lover though he before declaring that he was gay felt that he needed to “gather data before drawing a conclusion.”.

But the romance isn’t the only theme to the story: there is a mystery to be solved. Who is the Raven and why is someone out to get him? And who is the hideous being behind all of the recent attacks on campus?

All in all, I loved this humorous, uplifting and entertaining book with its quirky, adorable characters and a compelling plot. And the romance was super-sweet. So in my opinion, Anyta Sunday hit another home run for me. ⭐⭐⭐⭐⭐

You can purchase/check out Liam Davis and the Raven HERE