You are here: Home / Contemporary Fiction/Classics / Review of Less by Andrew Sean Greer 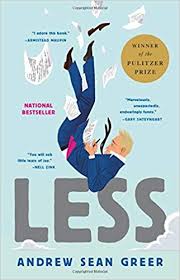 This book was a Pulitzer Prize winner for fiction in 2018 and is named after our main protagonist, Arthur Less, a fumbly, insecure gay man about to turn 50 and whose latest manuscript has just been rejected by his long-time publisher.

To make matters worse, a wedding invitation arrives in the mail announcing that Arthur’s boyfriend of the past nine years, Freddy, is marrying someone else. Hell, Arthur didn’t even realize that their relationship was over.

So he certainly wasn’t about to attend the wedding as that would be majorly awkward. But to refuse would look petty. Deeply discouraged and more than a bit heartbroken, Arthur does what anyone else would do in such as situation:

As it turns out, he has a stack of nearly-forgotten bookish invites to various literary events all around the world: Italy, France, Morocco, Japan, India, Germany…. so Less decides to accept every invitation, award ceremony, speaking engagement and teaching opportunity that was sent his way and embark on an around-the-world adventure.

After all, what could possibly go wrong?

What follows is a zany series of misadventures, misunderstandings, missteps, and more than a few personal humiliations as Arthur attempts to run away from his problems — or at least momentarily forget about them which he discovers isn’t easy to do.

Along the way, he reminisces about his life, he meets up with former lovers and aging friends, makes new friends and even comes close to falling in love.

The story takes bits and pieces of his current life and his memories and weaves them together into a compelling, insightful narrative — and the author does it with wit and humor.

You know, this quirky book ponders many of life’s important questions — universal questions — so that in this way, it was entirely relatable.

It was especially relatable for me, being a gay male in his 50’s but I think that the universal nature of the themes in this book such as love, loss, nostalgia, lost opportunities, growing older, disappointment, searching for meaning in our life, and acceptance would render it relatable to most people.

This poignant and thought-provoking book had me from the get-go. I thought this was a beautifully written and meaningful book with wondrously descriptive scenes and lush, vibrant prose.

It was an intoxicating and profoundly engaging read with plenty of humor and heart, and I ended up loving the quirky character of Arthur Less. The writing was clever, witty, sophisticated, and utterly charming. I was also pleased with the emotional and entirely satisfying ending which cinched its 5-star rating for me.

Purchase Less at The Book Depository