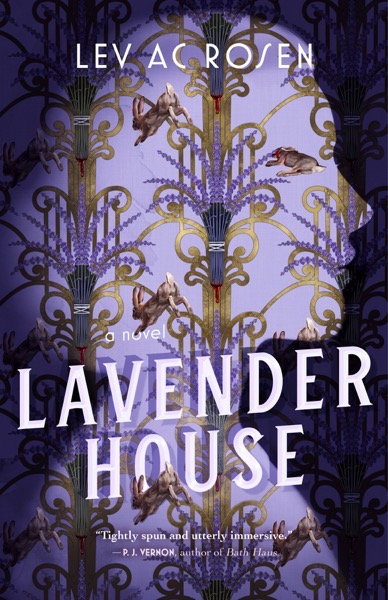 A delicious story from a new voice in suspense, Lev AC Rosen’s Lavender House is Knives Out with a queer historical twist.

Lavender House, 1952: the family seat of recently deceased matriarch Irene Lamontaine, head of the famous Lamontaine soap empire. Irene’s recipes for her signature scents are a well guarded secret—but it’s not the only one behind these gates. This estate offers a unique freedom, where none of the residents or staff hide who they are. But to keep their secret, they’ve needed to keep others out. And now they’re worried they’re keeping a murderer in.

Irene’s widow hires Evander Mills to uncover the truth behind her mysterious death. Andy, recently fired from the San Francisco police after being caught in a raid on a gay bar, is happy to accept—his calendar is wide open. And his secret is the kind of secret the Lamontaines understand.

Andy had never imagined a world like Lavender House. He’s seduced by the safety and freedom found behind its gates, where a queer family lives honestly and openly. But that honesty doesn’t extend to everything, and he quickly finds himself a pawn in a family game of old money, subterfuge, and jealousy—and Irene’s death is only the beginning.

When your existence is a crime, everything you do is criminal, and the gates of Lavender House can’t lock out the real world forever. Running a soap empire can be a dirty business.

Part cozy mystery, part hard-hitting historical fiction, Lavender House was a gripping story with a group of fascinating characters. The story takes place in the Bay area in 1952 and follows our main character Andy, a disgraced police officer who was fired after being caught in a raid of a gay club. He’s approached by Pearl Lamontaine, a wealthy and mysterious widow who asks him to figure out who murdered her wife. He agrees and is then brought to Lavender House, where he meets the rest of a created family of LGBT people:

What’s interesting about the novel is that it takes place during a time when it is quite dangerous to be queer, as we see firsthand during a particularly disturbing scene of violence in the story (consider yourself warned). Because of this, we see some of the impossible choices some of the characters are called on to make in order to protect themselves, their identity, and their loved ones. The story illustrated nicely how one false step can cause you to lose everything: your money, your home, your social standing, and even your life.

Aside from the hard-hitting theme of the difficulty of being queer in the 50s, Rosen also gives us a fun ‘whodunnit’ with plenty of red herrings to throw us off the scent of the true killer. It was fun journeying along with Andy as we discover each character’s possible motives as well as their own struggles with being queer in an unaccepting world. I loved this mismatched group of characters and enjoyed getting to know all of their quirks and idiosyncrasies as the story unraveled. These dynamic characters are beautifully complex, empathetic, and wonderfully rendered and the author really brought them to life in the narrative.

While on the surface, Lavender House is a cozy mystery, there’s real depth to the story, which delves into themes of acceptance, loneliness, homophobia, fear, false appearances, queer love, and found family. Though the story is tough to read in places, the seriousness is balanced by witty banter and several laugh-out-loud moments.

All in all, Lavender House is a well-crafted tale with compelling and vivid characters as well as a compelling mystery to solve. Recommended!