You are here: Home / YA Contemporary / Review of Lab Partners by M. Montgomery 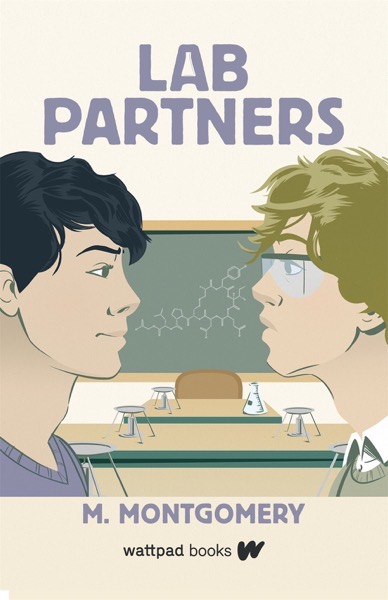 Lab Partners follows a lonely high school senior named Elliot Goldman. He’s sort of an outcast with no friends at school (except for Holly, who is mainly his sister’s friend) and who has been battling incessant bullying since middle school by three boys who seem to especially “have it out” for Elliot.

But Elliot’s life suddenly changes when a new student named Jordan joins their school and ends up being Elliot’s new chemistry lab partner. The two boys take to each other right away and become immediate friends. Jordan begins to be the bright spot in Elliot’s life. They even start spending time with each other outside of school, which is unheard of for Elliot.

But then things change one night when Jordan kisses Elliot, causing Elliot to question everything he knows about himself, including his sexuality and his relationship with Elliot. He now must decide what he really wants and whether he’s willing to take that next step with the boy that sends his stomach into flutters.

Now at first glance, I thought this was going to be a sweet coming-of-age story, and there certainly was that aspect to it. I loved the relationship between Jordan and Elliot and thought they had terrific chemistry together (both literally and figuratively). But this was also quite a serious treatment of bullying in high school, rendering some parts of the story difficult to read because of the brutal scenes where the three boys attack Elliot. The story illustrates just how far bullying can escalate when teachers and school administrators turn a blind eye and how it can affect a young person’s outlook on life and about themself. The despair and depression that Elliot went through were heartbreaking, though I will say, without any spoilers, that it all worked out in Elliot’s favor at the end.

The characterization in this book is really powerful, and I loved our two main characters. Elliot’s bravery is admirable as he risks his own safety in order to protect other kids in his school from bullying, resulting in him becoming their primary target. Jordan is also an amazing character, a boy completely comfortable in his own skin and who steadfastly supports Elliott every step along the way, both during Elliot’s coming out process and regarding the bullying.

The book not only addresses the dangers of bullying but also encapsulates depression, sexual orientation, self-discovery, and young love. The story also does an excellent job of illustrating the fluidity of sexuality and that for many people, one’s sexuality is not always so black and white. That being said, there’s also excellent aromantic/asexual representation in the story.

Now I will say that the book starts out a tad slow and I nearly gave up on it. The descriptions of mundane tasks were agonizingly detailed, most of which didn’t seem to have anything to do with the story. So in this way, it could have used some additional editing. But I’m definitely glad I stuck with it as it ended up being a captivating and sensitive coming-of-age story that, in addition to bullying and homophobia, adeptly tackles the confounding nature of sexuality.

The book is available now worldwide on The Book Depository and will be available in the US on March 10.