You are here: Home / LGBT Romance / Review of Keeping Casey by Amy Aislin 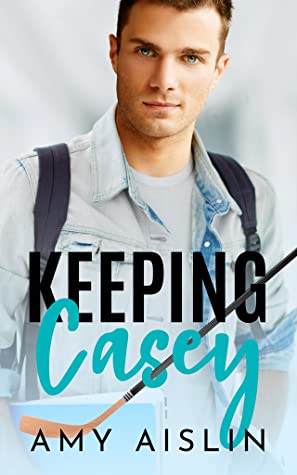 Casey Preston is the guy with the plan. The list-maker. The one who micromanages his own life.

Spontaneously offering to be his best friend’s fake boyfriend to get Ethan’s annoying team captain off his back?

That’s not thinking things through. It’s not even smart given Casey’s been fighting his feelings for Ethan for years.

Ethan Rain just wants to play hockey and get his college degree. Adding a fake boyfriend to the mix? He doesn’t need that complication.

If Casey were his real boyfriend, though? If he got to keep Casey forever? Now we’re talking.

But what if Casey doesn’t want to be kept?

Keeping Casey is a sweet college romance that contains many of my favorite tropes/elements: gay hockey players, friends-to-lovers, and fake-dating, so I was super excited to delve into this book. The story follows Casey and Ethan, who have been best friends throughout their entire lives. Ethan is demisexual, and Casey is gay, and both of them have a secret crush on the other — but neither has ever been brave enough to act on their feelings, each certain that their love is unrequited. Thus, there’s plenty of angst as well as mutual pining going on. What’s fun is that pretty much everyone around them assumes that they’re a couple because of the way they act towards each other, and their friends call them out on it more than once.

It’s also worth mentioning that the boys are bonded by a shared family tragedy: they both lost a parent in the same horrific construction accident, so this tragedy has overshadowed their decisions in life and affected each of them in different ways. They take care of each other, support each other, and provide that unconditional yet unspoken love that really is what they both need so desperately.

Their relationship takes a turn when, on the fly, they decide to become fake boyfriends in order to put Ethan’s homophobic team captain in his place. Suddenly, their intense feelings for each other are forced out into the open with some unexpected results. I love how these two move through so much indecision and inner doubt as they toy with the idea of falling for each other.

Note that this is an extremely slow burn and low heat story — in fact, they don’t even kiss until near the end of the book. In this way, sex is secondary to the intense emotional bond that the men share. So if you’re looking for a steamy romance, this isn’t it. What we do have, though, is a deep love and bond between two men who have intimate knowledge of each other’s faults and imperfections. Yes, both characters are flawed and slightly broken — but their complementary characteristics balance out their flaws.

Though this is a tender, lighthearted romance, there’s also a serious aspect to it as the story delves into topics such as homophobia, love, grief, parental distancing, chronic illness (Ethan is living with rheumatoid arthritis), fear, insecurity, and sexuality. The sprinkling of humor throughout, however, kept the story from being too heavy.

Though Keeping Casey may be a bit cliché in the way that it ends up resolving some pretty big problems and conflicts, it is an endearing romance that allows a reader to enjoy a bit of escapism into a beautiful relationship that never really falters. Their love is engaging and passionate — and Casey and Ethan have become one of my favorite couples. They both become different people by the end of this book, and it is lovely to see it happen. So though a tender romance is at the heart of this book, the story is also about facing unimaginable heartbreak and loss — and coming out stronger on the other side, no matter how long it takes you.