You are here: Home / YA Contemporary / Review of Jack’s On Fire by Owen Lach 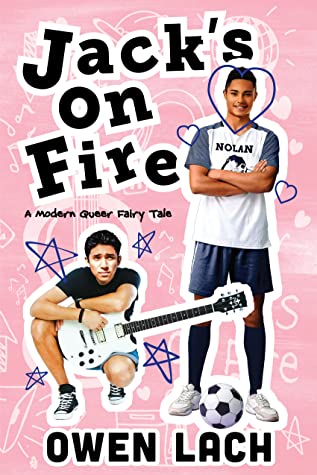 Faced with the impossible choice of staying home to risk being sent away to Father Sullivan’s special school for exceptionally happy boys or moving in with his older brother in California, 16-yr-old Jack Martin leaves behind everything he knows in Minneapolis to go to San Francisco. He finds himself at a new school with new friends and the freedom to be himself. Then sparks fly when Jack meets Damon, his Geometry tutor (and captain of the JV soccer team.) But Jack wonders if Damon feels those sparks, too. And does their budding friendship have a chance to become something more?

Jack’s On Fire is a heartwarming, modern, queer fairy tale about friendship, chosen family, and young, queer love perfect for fans of Heartstopper. Sure, there aren’t any fairies or wands. But what else would you call it when everything starts magically going your way?

Jack’s on Fire centers on sixteen-year-old Jack Martin (pronounced “mar-teen”), a young musician who ends up being outed by his vengeful ex, resulting in extreme homophobic bullying and abuse at his high school. It doesn’t help that his mother — a bigoted and religious zealot — is threatening to send Jack to a “correction camp.”

Thankfully, Jack’s older brother, who lives in San Francisco, offers to take Jack in, and suddenly Jack finds himself in a new environment where he’s free to be himself and doesn’t have to constantly look over his shoulder. What follows is a delightful story as Jack finds himself falling for Damon, his heartthrob math tutor. The question is: Does Damon feel the same, or is he simply being friendly?

This ended up being such a sweet and endearing queer young adult romance that utterly warmed my heart. The narrative is lighthearted, including an ensemble cast of delightful characters who end up being an essential support group for Jack, including his loving older brother, who supports Jack every step of the way. The souls of the supporting characters beam through like a bright light that zinged straight to my heart.

I loved watching Jack’s journey as he moves from an abusive environment to a free and open one and how he utterly blossomed at his new school. I enjoyed watching Jack as he learned to trust others again after being treated so poorly by everyone in his past.

Now, if you typically go for books with high angst, high tension, and plenty of drama, you might be disappointed with Jack’s on Fire. Though there is light angst throughout and certainly some difficulties to overcome, most of the drama is internal, leading to a sweet, gentle slow-burn of a story rather than a high-stakes one. I personally thought it was refreshing and had just enough angst to make me happy without shattering my heart into a million pieces — it’s the perfect story if you’re looking for a sweet and tender romance.

I felt that the author Owen Lach really nails the teenage soul in this story—the self-awareness, the confusion, the challenges, the raging emotions, and the longing. In this way, Jack’s on Fire is a love letter to anyone who has felt uncomfortable in their own skin and wondered where exactly they belonged in the world. This quirky, heartwarming queer romance will make you believe in love again

All in all, I loved this big-hearted novel and look forward to reading more by this author.