You are here: Home / YA Contemporary / Review of If you Change Your Mind by Robby Weber 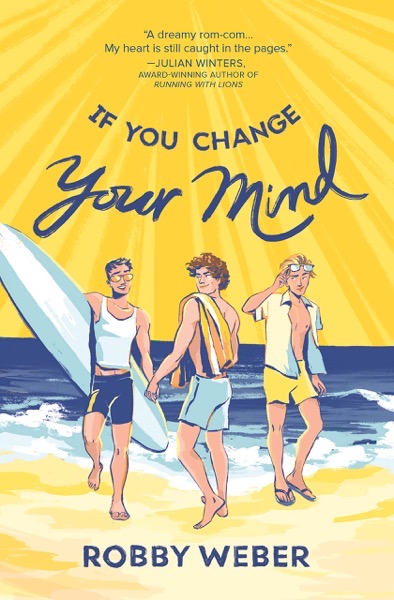 “A romantic hero’s journey with a happy ending that will leave you smiling and swooning… I loved it!” —Adam Silvera, #1 New York Times bestselling author of They Both Die at the End

In this hilarious and heartfelt debut novel, an aspiring screenwriter learns sometimes love has its own script.

Harry wants nothing more than to write Hollywood screenplays. He knows the first step toward achieving that goal is winning a screenwriting competition that will seal his admission into the college of his dreams, so he’s determined to spend his summer free of distractions—also known as boys—and finish his script. After last year, Harry is certain love only exists in the movies anyway.

But then the cause of his first heartbreak, Grant, returns with a secret that could change everything—not to mention, there’s a new boy in town, Logan, who is so charming and sweet, he’s making Harry question everything he knows about romance. As he tries to keep his emotions in check and stick to his perfect plan for the future, Harry’s about to learn that life doesn’t always follow a script.

If You Change Your Mind is a delightful summer romantic read which follows Harry during the summer of his senior year, who decides that he would spend his summer free of distractions, especially boys. Things don’t entirely turn out the way he’d hoped, however, and he ends up having to choose between two boys — a boy from his past and a boy who’d just wandered into his life. Typically, I’m not a fan of love triangles, but this one worked exceptionally well in the story. Though it was an essential element in the narrative, it didn’t overshadow the rest of the plot. In fact, I didn’t mind it one bit. It was actually fun journeying along with Harry as he tried to figure things out, especially when things got messy. What I especially enjoyed was that nobody was as they appeared to be.

It’s also worth mentioning that Harry is writing a screenplay that is supposed to help him get into the college of his dreams — a film school in California. What’s fun is that the beginning of every chapter contains a scene from Harry’s screenplay, which parallels his real life. I thought the play provided a compelling insight and element to Harry’s story.

What I really loved about the book was how Harry, even though he’s a bit insecure, refused to allow anyone to walk all over him or treat him with anything less than respect — although it took a couple of lessons for Harry to learn this. What we ended up with, then, is a touching story about following your dreams and not losing sight of what is really important — even when love comes to call.

All in all, I adored this novel. The character development was phenomenal, and the plot was riveting. I also enjoyed the themes about the importance of family, friendship, self-discovery, and not losing sight of the important things in life. Additionally, there were many movie references to well-known rom-coms, which added a fun element to the story (such as the title of the first chapter: When Harry Met Logan).

So if you’re in the mood for a breezy heartfelt gay rom-com with lovely characters that will tug on your heartstrings, then definitely check out If You Change Your Mind.