You are here: Home / YA Contemporary / Review of I Love You Just The Way You Are by Riley Rian 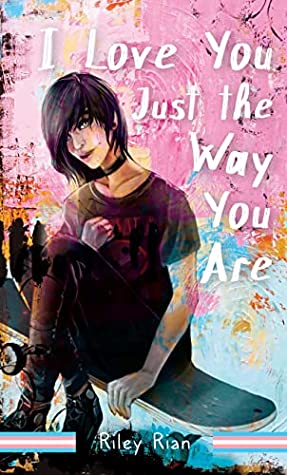 Kellan, star quarterback and secret manga artist, has fallen hard for Maddie, a trans-girl and Twitch streamer. They’ve gone to school together for years, but Kellan never noticed her until she started presenting as her authentic self. Now she’s all he can think about, even as the rest of his world is crumbling.

But she’s terrified that he’s deluded, not seeing her for who she really is. Will she take a chance and let him in? Will they be able to overcome a cruel society that would rather erase Maddie than accept her? Or will Kellan walk away when the pressure becomes too much?

Written by #OwnVoices transgender author Riley Rian, “I Love You Just the Way You Are” is a timely coming-of-age novel about opening your heart and discovering the power and magic of love.

The story is about Kellan, a high school quarterback and closeted Manga artist who falls for a trans girl and secret Twitch streamer named Maddie. Maddie has just started presenting as female, and Kellan, who has always identified as heterosexual, has fallen hard for Maddie. Maddie, however, is not convinced and doesn’t trust Kellan’s intentions or his declarations. But Kellan is determined to convince her that his feelings are genuine and that he likes her just the way she is. Not only that, he’ll need to convince Maddie that he will not cave to outside pressure — neither from his peers nor his parents.

This was a beautiful story written by an #ownvoices trans author about the metamorphosis of two young people who have chosen to stand up for themselves and live an authentic life — and obtain happiness in the process. The author did a superb job of illustrating the struggles, anxieties, experiences, and ups & downs of a young trans girl, and I enjoyed journeying along with Maddie throughout the novel. This was not only a lovely coming-of-age story but also a transgender romance one. I loved watching the beginnings of Maddie’s and Kellan’s romance, especially how he finally wins her over and convinces her that his feelings are genuine. It warmed my heart how he defended her and demonstrated his love for her time and time again. In this way, this was a story of self-discovery and self-growth for both of them. This book is all about casting off shame and stigma.

Additionally, I appreciated the real-life insight into transgender transitioning and felt that the novel provided essential insight into the difficulties and challenges that transgender people face. And though there was that aspect to it, it was also a heart-warming love story that brought tears to my eyes.

All in all, I adored this warm and embracing story and felt that not only were Maddie and Kellan relatable characters, but they were also compelling and engaging ones, both with their hidden hobbies/interests and as well as the demons they each are facing. A joyous and hopeful novel that worked on so many different levels for me, and I look forward to what this author will come up with next. Recommended!

Purchase I Love You Just the Way You Are from Amazon