You are here: Home / Uncategorized / Review of I Found You by Lisa Jewell 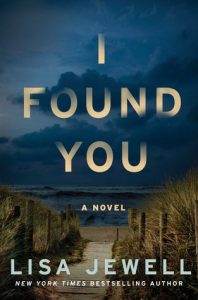 I Found You follows a single mother and artist named Alice living on a British seaside. One day she spots a stray man who is sitting on the beach near her house and staring at the ocean. He’d been there for hours and has no coat and no idea what is name is or why he’s there. Against her own better judgment, she invites him to stay with her until he gets his memory back and nicknames him Frank for the time being.

Meanwhile, in a London suburb, we’re introduced to Lily Monrose, a recently-married young bride who, originally from Ukraine, moved to London to marry her husband, Carl. They’d only been married for a couple of weeks when one day, he doesn’t come home from work, so Lily calls the police.

After she brings them her husband’s passport, she’s shocked to learn that the passport was purchased on the dark web, and according to police, her husband, as she’d known him, doesn’t exist.

Then the story moves twenty-three years in the past where we’re introduced to the Ross family, specifically their two teenagers, Gray and Kirsty, who are on summer vacation with their parents. They meet a young man named Mark Tate who’s in town visiting his Aunt and who develops an obsessive interest in Kirsty, which troubles Gray. And Gray isn’t surprised when things take a dark turn.

So these are the three storylines and the multiple POVs of Alice, Lily, and Gray, and we move back and forth as they become closer and closer to intertwining. I loved this method of storytelling, and I found myself immediately engrossed in each of the three plotlines as each of them slowly increased the suspense throughout the course of the novel.

It was so much fun trying to guess how these stories would eventually come together. Now I will say that this wasn’t a particularly action-based story but rather delved deeply into the development of the characters, which worked really well for me.

They were so compelling, well-fleshed out, and multi-layered that I ended up feeling as though I know them personally. They felt like ‘real’ people.

The tone of the story started out lightly, shifted to a bit darker, and then to downright ominous as we delve into some serious subject matter. I thought this story was tightly plotted with the surprises coming at just the right time.

Franks memory slowly begins to return, Lily meets people who can help solve the mystery that is her husband and the events in the past unfold, revealing their connection to the present day. I enjoyed how I was never quite sure who to trust as part of the story was like a spider web of lies, each woven tightly only to reveal yet another layer of lies underneath.

So for quite a while, we weren’t sure who to believe and who to trust, which rendered the story all the more exciting for me.

Jewell writes a wonderfully atmospheric, compulsive chiller of a thriller with overtones of horror. I found this story addictive, compulsive, dark, and sinister, and the writing is taut with a gloomy black cloud hanging over our cast of characters.

I loved the delightful, pervasive feeling of menace that lingers over the story, especially when we had no idea who was the true villain in the story. I think that one of the things that I liked most about this book is that I was never sure who I was “rooting” for at a given time.

There’s real depth to the story, which delves into themes of grief, loneliness, regret, crippling emotional suffering, double lives, and second chances. There’s even a bit of romance thrown it.

The development and progress of the plot were very curious and thrilling and felt to me like I was unearthing some long-lost treasure. I also thought that the short chapters and alternating POVs kept the story moving along at a brisk and satisfying pace.

All in all, I found this to be brilliantly devious, dark, and emotionally riveting — at times creepy and violent — but definitely propulsive, another standout gem by Lisa Jewell.

Purchase I Found You on Amazon

Purchase I Found You on the Book Depository