You are here: Home / LGBT Romance / Review of I Buried a Witch by Josh Lanyon 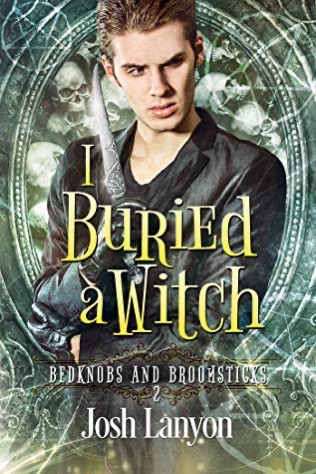 I Buried a Witch is the second book in the Bedknobs and Brooksticks trilogy, a romantic gay mystery series by Josh Lanyon. This book is the sequel to “Mainly by Moonlight,” in which Cosmo Saville, a bloodline witch, marries police detective John Galbraith, but there’s one catch: John doesn’t know his new husband is a witch.

That all changes in this book, however, once Cosmo begins investigating the murders of several Wiccans he believes to be related. He inadvertently comes out of the “broom closet” to John, and his news is not well-received. Feeling tricked and deceived, John leaves Cosmo and refuses to take his calls or see him.

But when Cosmo’s investigation puts him directly in the crosshairs of the murderer, John must decide whether he can put his feelings aside and come to the aid of his husband.

I enjoyed this book a lot more than I did the first one. We got to delve a little deeper into the personalities of John and Cosmo, helping us to understand their motivations in the story (though I still think John is a controlling jerk).

Cosmo’s character has really grown on me in this story. He bumbling, a bit ditzy but sweet and lovable as well. But what renders him a truly admirable character is that he’s willing to risk his own life to help save others and to find justice for the innocent victims who were murdered. I also enjoyed Cosmo’s bubbly personality, and he ended up being quite the endearing character for me.

Lanyon really ratchets up the tension in this book, and I found myself deeply engrossed in the story, especially after a couple of failed assassination attempts on poor Cosmo and the murder of several young Wiccan women. There’s also the imminent war brewing between Craft and SPMMR, a mysterious and possibly nefarious organization that we don’t know all that much about yet.

Several secrets and betrayals do come to the forefront in this story, which immersed me even more in the world that the author has created here. I loved how the tone shifts from light to dark, snarky to serious, and back again.

My only niggle is the amount of French that the author used in the book. Now I happen to speak French, so I was able to understand it, no problem. But for someone unfamiliar with the language, I’d imagine that certain passages would be frustrating for them.

But all in all, I enjoyed I Buried a Witch. Though witches are a continuing theme in this trilogy, the story is, at its core, about relationships: family, friends, and lovers; connecting and sometimes not; and the secrets and deception that often interfere with our closest relationships.

Of course, there are some interesting questions that still need to be answered. Why is John invulnerable to magic? Who tried to murder Cosmo? What tragic event happened in John’s past in Somalia that he refuses to talk about? I’m hoping these and other questions will be answered in the third and final book in the series, which I do plan on reading when it comes out in March of 2020.

Purchase I Buried a Witch on Amazon

Purchase I Buried a Witch on The Book Depository