You are here: Home / LGBT Romance / Review of Howling on Hold by E.J. Russell 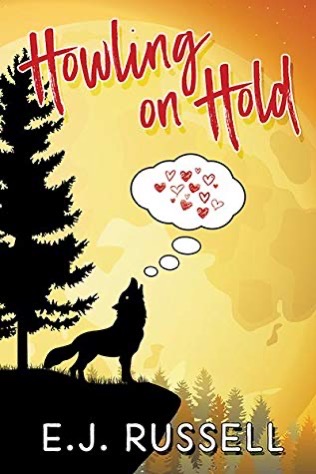 Howling on Hold is a fun gay shifter story that takes place at a group residence for werewolves called the Howling (aka “The Doghouse). Young werewolves need to spend three years at the residence to help them to control their instincts so they can seamlessly blend into the ordinary world. The story follows two main characters, Chase, who is the RA at the Howling residence, and Tanner, a young alpha-in-training who is nearly the end of this three-year stint, after which he must return to his pack and take the role of alpha.

Given that Chase is the RA and in a position of responsibility, he has ignored his feelings for Tanner. Likewise, Tanner has pushed aside his feelings for Chase. But now that Tanner is turning 21, he’s hoping that perhaps things will be different now that he is an adult and no longer under Chase’s charge. But Tanner’s world comes crashing down on the eve of his 21st birthday, resulting in Tanner being missing and running for his life after Chase rebuffs him, and Chase being stripped of his RA duties. So now the question is: Will Chase ever manage to find Tanner again?

First off, I loved the quirky secondary characters, especially Jordan who’s having an especially difficult time managing his “wolfy” instincts and has a knack for getting himself into trouble. There was a lot of fun banter between the characters, which added an enjoyable lightness to the story.

And as for our two main characters, I found them both extremely likable and ended up rooting for them to finally get together – and I thought the journey that took them to their happily ever after was well done and a lot of fun to boot.

This was a story with engaging characters and a well-crafted plot, along with several surprises peppered throughout the story. It wasn’t only cleverly written but also was laugh-out-loud funny in places and found it to be a breath of fresh air in the paranormal genre. If you like witty banter, shenanigans, and a heartfelt romance, then Howling on Hold is the book for you.

Purchase Howling on Hold from Amazon