You are here: Home / YA Contemporary / Review of How to Speak Boy by Tiana Smith 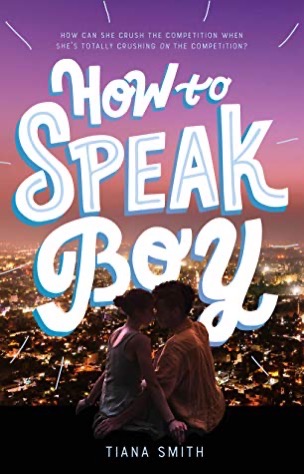 How to Speak Boy is a Young Adult contemporary romance and follows our main character Quinn who is hugely competitive in her Speech and Debate team at school. She and an arrogant young man named Grayson are competitive rivals, so much so that Quinn considers him her enemy. But when Grayson and Quinn are forced to pair up as co-captains of the Speech and Debate team, things take an interesting turn as Quinn realizes that Grayson perhaps isn’t the monster that she had built him up to be in her mind.

But though he is fast becoming a friend (and possibly even more?), Quinn doesn’t completely trust him and can’t help but wonder whether his friendly banter is fake and that he plans to sabotage her chances of winning at the finals tournament, something he has purportedly done in the past.

Additionally, events take an interesting turn when a graded test paper belonging to Student (15211) is accidentally placed in Quinn’s receptacle (15511). Because students are only identified by their student numbers, Quinn doesn’t know the student’s identity. So she returns the paper with a note, explaining the mix-up, which then begins a super-sweet back-and-forth correspondence between Quinn and the mystery student.

So not only is she beginning to fall for Grayson, but her curiosity about her mystery correspondent is also peaked, and she begins to develop feelings for the unknown boy. Oh — and Quinn also suspects that Carter, her long-time friend, has feelings for her and is trying to push Grayson out of the way. Now Quinn has to decide who she can trust and whether to listen to her heart instead of her head.

I love the enemies-to-lovers trope and felt that it worked exceptionally well here. The banter between Grayson and Quinn is witty, snarky, and a lot of fun, and both of the characters were extremely likable and relatable. Several of their interactions caused me to cackle out loud or, at the very least, brought a smile to my face.

Many of us can relate to Quinn’s desire for academic perfection and the intense desire to succeed — and all the pressure and stress that goes along with that (some of which she’d created herself). It’s always refreshing to see realistic characters in stories, especially stories about high school and I found myself forming a bond with Quinn right from the get-go. Quinn is spirited, stubborn, feisty, and has the personality, backbone, and style to complement and balance Grayson’s suave and charismatic character.

All in all, How to Speak Boy was a sweet and humorous YA romance with some powerful themes of friendship, love, competitiveness, academic perfection, rivalry, trust, and betrayal. The romance was engaging with a compelling plot and well-defined characters who were a joy to read. The secret note correspondence added extra intrigue to the story that worked perfectly here. I also found the Speech/Debate theme angle to the story refreshing, as I don’t think I’ve read this element in any other book.

My only niggle is not with the story but rather with the synopsis/blurb. I felt that this story would have been even more impressive had the synopsis not revealed the identity of the mystery penpal. Grr! The book did an excellent job of keeping their identity a secret — too bad the synopsis didn’t.

Purchase How to Speak Boy on The Book Depository

Purchase How to Speak Boy on Amazon