You are here: Home / Science Fiction / Review of Hello, Rest of My Life by Rick Lenz 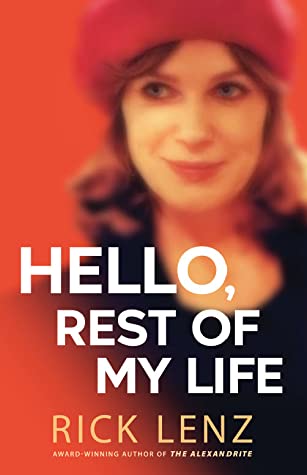 When Danny Maytree, an ambitious young 1970s film actor, met Samantha on a blind date and fell in love, he decided he no longer cared about Tinseltown stardom. He still acted sometimes, but he became a writer too.

Now married and in their seventies, they find a dog whose faded tag has the name “Tali” and a Beverly Hills phone prefix from fifty years earlier.

Writing a time travel novel in 2021, Danny gets a call from a mysterious, velvet-voiced acting agent. He has a meeting tomorrow in Beverly Hills. Tali, in one of their singular “conversations,” questions Danny’s motives.

Now, Danny is in Beverly Hills-not at the meeting, but in the elegant home where he lived in 1974, forty-seven years ago. He is twenty-seven again, bewildered, but with a second chance at his Hollywood dream.

He doesn’t want it, because Sam is not in this world.

Unhappy in his new “now,” he realizes his journey back to “Kansas” hinges on the magic of film. A sharkish agent helps him navigate Hollywood’s rocky shoals. A worldly-wise teen and a New Age fortune-teller offer spiritual advice. And a sexy wicked witch throws a monkey wrench in his path.

Given that I love time-travel stories, I was excited when this one came to my attention. It follows seventy-five-year-old Danny Maytree, a former actor who suddenly finds himself thrust back in time 47 years to 1974. Danny is once again 27 and finds that he has a second chance of living his Hollywood dream. However, he soon discovers that the dream may not be everything it’s cracked up to be without his beloved wife, Samantha. Now trapped in time, Danny desperately tries to find his way back to his own time — and to Samantha.

This was a well-written and twisty love story with rich, evocative scenes and compelling, well-drawn characters (including the delightful and enigmatic dog, Tali). In addition, there was plenty of fun and witty banter between the characters, which added to the richness and enjoyment of the story.

I found this to be an utterly riveting tale that sent me on a wild roller-coaster ride of emotions. By about 1/4 of the way in, I was sucked into Danny’s story and loved seeing his reaction to his situation, especially once he began concocting a plan to return home.

Time travel, along with its pitfalls and potential paradoxes, can sometimes be migraine-inducing, but that was not the case with this story. All the details you need are worked seamlessly into the narrative. The time travel aspect here was believable, unique, and not at all confusing. Hello, Rest of My Life is a blend of science-fiction, a touch of history, and romance. I thought this book was a breath of fresh air in a well-worn genre. An unexpected gem!