You are here: Home / YA Contemporary / Review of Grave Things Like Love by Sara Bennett Wealer 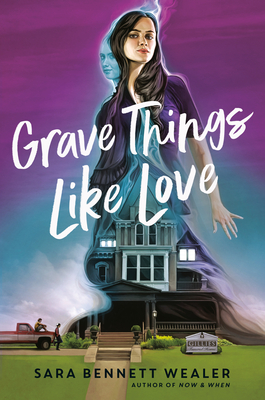 A contemporary YA romance with a paranormal twist: what happens when in between trying to decide which boy is the right boy, a girl finds out the funeral home her family owns might be haunted?

Elaine’s home is a bit . . . different. It’s a funeral home that has been in her family since the 1800s–and it’s why everyone calls her Funeral Girl. And even though she’s lived there her whole life, there are still secrets to be found.

When Xander, a cute new boy with a penchant for ghost hunting, arrives in town, Elaine feels an instant spark. His daring and spontaneous ways help her go from Funeral Girl to Fun Girl. Then there’s Miles, Elaine’s oldest friend, who she’s starting to see in a completely new light.

After Xander convinces her to stage a seance one night, Elaine discovers that her home might be haunted by a kindred spirit–the daughter of the funeral home’s original owner. But who wants to be haunted by the dead when there are boys to spend time with? After all, you only live once. . . .

This book’s blurb captured my attention right away: a girl who works at a haunted funeral home and captures the interest of a young ghost hunter? Count me in!

Grave Things Like Love is aYA romance novel with just a touch of the paranormal that follows Elaine (aka “Funeral Girl”), who is expected to take over the family funeral business from her parents. She’s not too keen on the idea but has resigned herself to having her future planned out for her. Things change, however, when a young man named Xander comes into town — an intense and attractive boy who is determined to make a name for himself as a ghost hunter. Elaine attracts his attention, and the two begin spending more and more time together, much to the chagrin of her best friend, Miles and her parents.

Now, if you’re going into this expecting a straight-up ghost story, you might be disappointed. The actual ghost encounters play only a small part in the plot. Instead, the story mainly explores Elaine as she begins to discover who she is and who she wants to be and, through Xander’s influence, realizes that she does have choices and can make her own life decisions, even if it means stepping away from her family. All of this, combined with Elaine’s dating dilemmas, lead to quite a bit of high drama. In fact, after a series of bad decisions, Elaine ends up in quite a bit of hot water and soon finds herself in over her head.

Let me also mention that there’s also a bit of a love triangle in the story. Now, typically, I’m not a fan of this plot device, but it was handled exceptionally well in the novel, and I didn’t mind it here at all.

All in all, Grave Things Like Love was a cute YA contemporary with just a whisper of the paranormal. I thought the author did a fantastic job weaving through the intricacies of family expectations, leading to a fun, engaging story with a fair amount of angst. I also enjoyed the tantalizing glimpse into the everyday life of funeral directors, which added an extra compelling element to the story. Recommended!