You are here: Home / Uncategorized / Review of Flipping by R. Lee Fryar 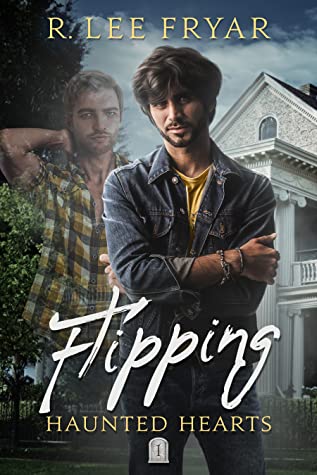 Charley Dalton died a homeless man. He’s not about to be a homeless ghost.

When Charley’s haunted house passes into the hands of psychic house flipper, Austin Sparks, Charley promises himself and the ghosts he lives with that he’ll haunt overtime to get rid of the threat. Once people start pulling up carpets and tearing down walls, a haunted house is doomed.

Charley devises a plan to scare Austin off for good. But Austin Sparks doesn’t scare easily. Worse, he’s sexy as hell, and soon Charley has a bigger problem than failed plans. He’s got the hots for the enemy.

But forbidden romance isn’t part of a ghost’s happily-ever-afterlife.

I’m a sucker for a queer ghost romance, so I was excited when this one came to my attention. It ended up being much more than I thought it would.

It follows Charley, who died of food poisoning and now lives a peaceful life with his ghost family — peaceful, that is until his house passes into the hands of house flipper Austin Sparks. Once Austin begins renovations, the ghosts decide that something has to be done to stop them; otherwise, their futures will be doomed. Charley takes the initiative and promises the others that he will rid the house of the intruders. But, of course, things don’t quite go according to plan, especially once Charley begins to fall for Austin.

I adored the characterization in this story. Both Charlie and Austin were relatable, complex, and well drawn-out, and I soon found myself rooting for both of them. The slow-burn romance was well done and believable, and I found the relationship between Charlie and Austin to be exceptionally moving.

Additionally, the world-building was phenomenal, and the novel gave the reader a vivid sense of place, making me feel as though I were in the house right along with the characters. It was ripping with atmosphere, which immediately drew me in. The author also gives us several riveting secondary characters, a couple of which played an integral part in the storyline, especially once an entirely new and surprising storyline develops. As the story went, I put together a couple of pieces, but I didn’t pick up on the huge curveball towards the end.

I also enjoyed how the house itself took care of the ghosts, which proved to be quite a unique take on the classic haunted house ghost story. All in all, I loved everything about this story: the setting, characters, the wry humor, the tender romantic relationship, the relationships between the ghosts, and the plot line. It had me smiling one moment and tearing up the next. What I especially enjoyed was how lighthearted, and funny this book was, even when it was deeply touching.