You are here: Home / LGBT Romance / Review of Epically Earnest by Molly Horan 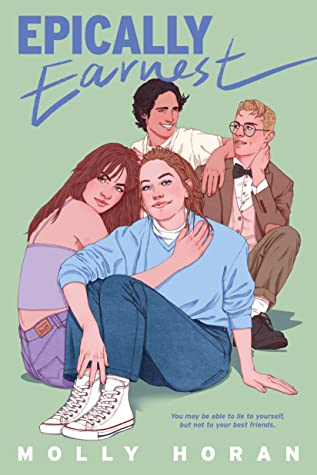 In this delightfully romantic LGBTQ+ comedy-of-errors inspired by Oscar Wilde’s The Importance of Being Earnest, a high school senior works up the courage to ask her long-time crush to prom all while deciding if she should look for her bio family.

Jane Grady’s claim to fame is that she was one first viral internet sensations, dubbed #bagbaby—discovered as a one-year-old in an oversized Gucci bag by her adopted father in a Poughkeepsie train station. Now in her senior year of high school, Jane is questioning whether she wants to look for her bio family due to a loving, but deeply misguided push from her best friend Algie, while also navigating an all-consuming crush on his cousin, the beautiful, way-out-of-her-league Gwen Fairfax.

And while Janey’s never thought of herself as the earnest type, she needs to be honest with her parents, Algie, Gwen, but mostly herself if she wants to make her life truly epic. With a wink toward Oscar Wilde’s beloved play, Epically Earnest explores the complexity of identity, the many forms family can take, and the importance of being . . . yourself.

This endearing queer slice-of-life romcom was so much fun! I love this loose retelling of Oscar Wilde’s “The Importance of Being Earnest,” and the Oscar Wilde quotes at the beginning of each chapter were a delightful, extra touch. I especially enjoyed the overarching theme of family in the story – family found and family born into. But the sweet blossoming romances between Janey and Gwen, and Cecil and Algie (short for Algernon, a character from The Importance of Being Earnest) were at the heart of this novel. In addition, I loved the tender portrayal of the uncertainty of young love in the story — and first love for some of the main characters. So in this way, the idea of relationships played a huge role in the story — relationships between friends, between lovers, and between family, all of which really resonated with me.

Being adopted myself, I could relate very well to Janey’s inner turmoil about meeting her birth family and how to tell her adoptive parents that she was considering a meetup with her blood relatives. I liked the way the author handled the adoption issue and felt it was well done and respectful.

There was also plenty of humor — fun, witty banter that caused me to chuckle out loud on more than one occasion. Overall, the story was light and enjoyable — with no significant angst or heaviness. That being said, I found the conflict in the story minimal, with no real obstacles to the characters finding their HEA. So for those who like their stories a little more on the angsty side, you won’t find that here.

All in all, I loved this little story about a teen girl trying to find the inner bravery to ask her crush to the prom, while also discovering her biological family. We end up seeing quite a bit of character development from both Janey and her friend Algie (who was, in the past, kind of a ‘playboy.’). A quick and easy read with nice LGBTQIA+ and adoption representation and plenty of humor that put a smile on my face.

A huge thank you to Netgalley and Clarion Books for providing a review copy of this book.