You are here: Home / Horror / Review of Edge of the Known Bus Line by James R. Gapinski 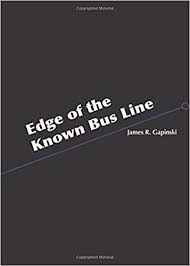 I won this novella in a Goodreads drawing and wow…what a strange, disturbing little book it was.

This is a dystopian/apocalyptic novel that follows a woman — I don’t think we ever even learn her name — whose daily bus commute takes an abrupt detour one day, ending up in the town of “Not in Service,” population 66.

She and her fellow passengers are forced off the bus via gunpoint, and she learns pretty quickly that the town is brutal, gruesome and horrifying. The townsfolk, who were all at one time passengers like herself, are dressed in rags, appear sickly, live in tattered tents or huts and in order to survive, they eat bugs, rats…and each other.

They’ve developed a strange sort of surreal society divided into two main factions: the Chicago Faction and the Pittsburg Faction, and if you want to survive, you need to join one of them. The people in the town, who for the most part have been stripped of any human dignity (though they convince themselves otherwise), have created a crazy religion around the idea that someday a bus will arrive with the destination of Chicago or Pittsburg — somewhere other than Out of Service.

So from the moment our main character arrives, we follow her as she desperately searches for a way out of the hellhole, refusing to believe that there is no way to escape, as the other townspeople have claimed. Fearless and hopeful, she makes one failed attempt after another to escape which renders the story all the more horrifying. So in this way, the book was sort of a survival story. What’s interesting is that our main character ends up being kind of an anti-hero as she’s harboring some pretty serious secrets of her own.

This truly messed up world was also fascinating in a morbid kind of way — it was gross, disturbing and super cringe-worthy. Yet, this story with its twisted plot was also a page-turner as we want to see if our heroine would finally manage to escape the nightmare in which she’d been unwillingly placed. It’s like the morbid fascination one has with a car accident: I can’t bear to look yet I can’t look away.

It’s also interesting that no matter how dark and twisted the story was, there was a good peppering of humor thrown in. Dark humor, mind you but humor nonetheless, and I actually did catch myself laughing out loud several times. But still, you’ll want to keep in mind that the book was filled with grotesque scenes of violence and cannibalism and is definitely not for the faint of heart.

All in all, Edge of the Known Bus Line is a great read! I found this a dark, compelling and mesmerizing story with rich, multi-faceted characters with an enthralling storyline. The world-building is phenomenal, and the delightfully twisted and chilling plot sucked me right in so much so that I read the entire novella in one go. This unsettling story certainly provides a lot of think about well after the last page has been turned.

I don’t think I’m going to be taking a bus anytime soon.

In the spirit of disclosure, I won this book in a giveaway and was under no obligation to write a review.

Purchase Edge of the Known Bus Line at Amazon

Purchase Edge of the Known Bus Line at The Book Depository