You are here: Home / YA Contemporary / Review of Dear Evan Hansen by Val Emmich 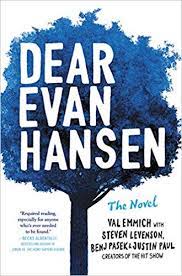 This book was a collaboration by four authors: Val Emmich, Steven Levenson, Benj Pasek, and Justin Paul, which was was originally a Broadway play that I unfortunately, didn’t get a chance to see. But from my understanding, it was quite well received.

Introducing Evan and his letters

So the book follows Evan, a high school senior who has horrible social anxiety. Under the direction of his therapist, he writes a letter to himself each day that starts out with:

A letter ends up in the wrong hands

But things don’t go so well for Evan one day when one of those letters to himself ends up in the wrong hands. And, it just so happens that this particular classmate commits suicide with a copy of Evan’s letter in his pocket.

Now the letter in question was a rather dark letter, a letter detailing Evan’s doubts, depression and his particularly somber view on life at the time it was written.

What results is a series of misunderstandings due to one simple lie. We then follow Evan along with the deceased student’s parents on a heart-wrenching journey through grief and mental health.

You see, Evan knew that the student’s parents were hurting deeply, so he chose to tell one little white lie because at the time, he felt it was the right thing to do. It was a simple lie — a lie meant to help rather than to hurt.

And the lie grows….and grows….

Because of this and his strong urge not to cause the student’s parents any more pain or take away their hope, Evan tells even more lies to keep the story going, and he gets in deeper and deeper and deeper.

Thrust into the Spotlight

This book also portrayed in a somewhat frightening way, the power that social media plays in our lives and how it has the capacity to cause real harm as well as promote healing.

So because of this misunderstanding and Evan’s lie, Evan, a boy who preferred to move through his day unnoticed and invisible, is suddenly thrust in the spotlight. Now on the positive side, he does find acceptance among his peers and for the first time, is propelled forward with a new purpose.

On the negative side, this new world of Evan’s is about to unravel and come crashing down, and there’s not a damn thing he can do about it.

I ended up enjoying this book — although I don’t feel “enjoying” is the proper word to use about a book whose subject deals with the aftermath of a suicide. Let’s me just say that it was a compelling read and was very disturbing and heartbreaking at times.

The story dealt with some very tough topics such as suicide, bullying, isolation, mental health, loneliness and lying but it didn’t do so in an After-School-Special hit-you-over-the-head kind of way. Rather, the topics were handled with dignity rather than in a cringy, in-your-face way.

Though…I will say that the situation that Evan found itself in made me cringe on several occasions, but it was a cringe of embarrassment for Evan rather than because the tone of the book was preachy.

All in all, I felt that this was a powerful well-told story that illustrated wonderfully the ups and downs of life in high school and how the course of our life can change from one simple decision, for good or for ill. I ended up giving this book four stars. Recommended!