You are here: Home / YA Contemporary / Review of Darius the Great Is Not Okay by Adib Khorram 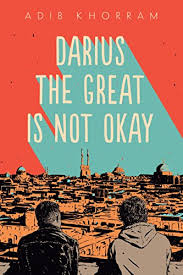