You are here: Home / YA LGBT / Review of Cub by Paul Coccia 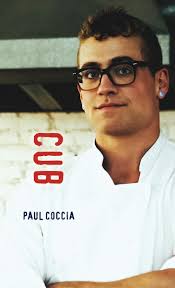 Cub is a short LGBTQ young adult novel that follows a seventeen-year-old chubby young man named Theo who loves to bake and is quite good at it. He dreams of attending culinary school and opening up his own bakery one day. Knowing that Theo is an excellent baker and deserves recognition, his best friend Di enters him into a cooking competition at a new trendy restaurant in Toronto called Heat. The contest will last for several weeks, with one contestant being eliminated after each weekly round. The rest of the story revolves around the competition and Theo’s interaction with the head celebrity chef KCC and the other contestants.

As Theo begins to win rounds, he attracts the attention and admiration of not only the audience who is watching the competition but also of KCC, who makes it quite clear to Theo that he’s interested in much more than Theo’s baking ability. He lets Theo know that if Theo does what KCC wants — in and out of the kitchen — then he’ll help Theo to launch his career. So now Theo has to decide just how far he’s willing to go to achieve his dreams.

We need to keep in mind here that KCC is much older than Theo — I got the impression that he was in his late 20’s or 30’s — and Theo is still a minor at seventeen. So the scene where KCC aggressively comes onto Theo was super-predatory and cringy to me, which I imagine is what the author intended.

Truth be told, one particular scene reminded me of something I personally went through when I was sixteen, so it was a tad difficult for me to read. I found it a bit upsetting and “triggery,” though I imagine it’s a difficult scene for most people to read. It definitely pulled me outside of my comfort zone.

But in spite of me feeling uncomfortable, I thought the author handled the situation extremely well and did an excellent job of portraying the range of mixed emotions that Theo experiences whenever KCC hits on him. On the one hand, here Theo is, a pudgy seventeen-year-old who has attracted the sexual attention of a gorgeous celebrity chef, one of his idols, in fact. But on the other hand, Theo feels that things are moving way too quickly and the situation feels “wrong” to him — the fact that the man is considerably older than Theo could be adding to that sense of wrongness. I thought it was riveting being in Theo’s head as he tried to sort this all out.

Though this is a short book, I thought it was an incredibly well-told story. I loved seeing Theo’s growth throughout the book, as he moved from someone with low self-esteem to someone confident and self-assured. It was lovely seeing Theo beam as he gained more and more admiration from the audience during the competition. At the beginning of the book, Theo was shy and terrified of being put into the spotlight, but by the end of the book, he was confident — master of his world — and he completed the required baking trials with finesse.

My one real niggle is that the book is too short! It’s more of a novella, coming in at 144 pages and though the story was good, it could have used some additional character development. We’re given just enough details to follow the story but I think this novel would have been richer had we delved a little more in the head of Theo, KCC, and Di.

But this short and sweet book pulled me in early, on the strength of Theo’s character, who I thought was absolutely lovable and found myself rooting for him throughout the competition and the book.

Though a couple of scenes were unsetting, the story invites readers to ask themselves whether, when placed in a similar situation, they would make the same choice as Theo. So in this way, Cub is a thought-provoking and touching story, at times poignant, at times playful but tremendously moving. Though the novel was short, it packed a punch. It was an engaging novella, and I found it easy to become invested in the outcome. I will definitely be on the lookout for more books by this author. Recommended!

Purchase Cub at The Book Depository