You are here: Home / YA Fantasy/Urban Fantasy / Review of City of Heavenly Fire by Cassandra Clare 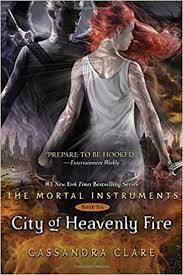 I finally did it – I finished the Mortal Instruments series by Cassandra Clare by completing City of Heavenly Fire this month, the last and final book in the series. I thoroughly enjoyed delving into this series though there was a little bit of drag in the middle of it. But boy, what an ending!

As usual, I can’t say too much about this particular book without spoiling it for those who haven’t read the series and wish to. I will say that the fascinating tale of the Shadowhunters vs the ultimate evil comes to a conclusion in this book in an explosive showdown of which there is somewhat of a bittersweet feeling. It is war after all and people die. Even beloved characters. But I shan’t say more about that.

This final story in the series was one hell of an action-packed roller coaster ride with a satisfying ending, tragic deaths notwithstanding. I also really loved the original premise of the Heavenly Fire and how it worked in this book. Truly impressive.

And this story had the best villain ever. All in all, The City of Heavenly fire was a book with plenty of adventure, action and yes, heartbreak and I’m so glad stuck it out with this series.

Given that I already have the books in the next series, the Infernal Devices, I definitely will be continuing on with the Shadowhunter world.