You are here: Home / Contemporary Fiction/Classics / Review of Cemetery Road by Greg Iles 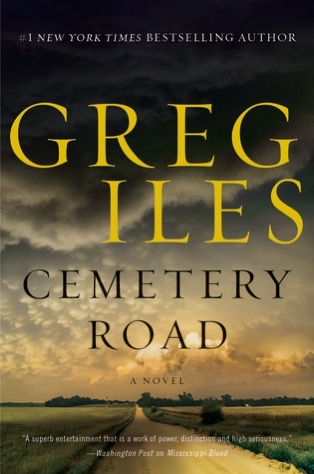 This is my first Greg Iles novel, and I’m so glad I had the opportunity to read it. Holy. Freaking. Moly. What a tale! The story sucked me in right from the opening lines:

“I never meant to kill my brother. I never set out to hate my father. I never dreamed I would bury my own son. Nor could I have imagined that I would betray the childhood friend who saved my life, or win a Pulitzer Prize for telling a lie. All these things I have done, yet most people I know would call me an honorable man.”

Cemetery Road follows Pulitzer Prize-winning journalist Marshall McEwan, a man with a somewhat dark and painful past, who has recently returned to Bienville, Mississippi, to take care of his ailing alcoholic father and provide support to his mother. Once in town, he connects with his former lover, Jet, who has married Paul Matheson, Marshall’s best friend.

But when Buck Ferris, who has been a father figure/mentor to Marshall, is found dead, Marshall is convinced that it was no accident and that foul play was involved. Moreover, he suspects that a The Poker Club, the group of rich, powerful, corrupt, and ruthless men who pretty much run the town, is connected.

Marshall suspects that Buck may have made a discovery that could put the kibosh on the new paper mill that is close to opening — a deal that could bring in a billion dollars to the town and greatly enrich the Poker Club members.

Marshall and Jet join forces to figure out what really happened to Buck Ferris and who was responsible.

In so doing, they draw the attention of The Poker Club who doesn’t hesitate to bully, intimidate, blackmail and threaten anyone who stands in their way, especially once Marshall and Jet begin to unearth their dangerous secrets that could no doubt lead to more murder, especially once they uncover Marshall’s own dark secrets.

Cemetery Road is a gritty story with many, many twists, as well as layers upon layers of deception, treachery, and corruption, and the surprises come fast and furious. The author certainly has a knack for making the reader care about their characters, probably because they are so well-fleshed out and fascinating.

I love how multidimensional they all were. They were also all very much flawed — including Marshall, the main character – and as we quickly learn, nobody is what they appear on the surface.

The writing is evocative and atmospheric, which lent a richness to the story, as did the complexity of the plot and had me hypnotized from the outset. Though the plot is complex and the prose eloquent, it is not at all difficult to follow.

The author has spun here a genuinely creepy and unsettling crime and mystery tale full of dastardly characters and a setting where nobody can be trusted, and I found the characters and their motives utterly enticing.

This is quite a lengthy novel — almost 600 pages of dense prose — but it’s well worth the effort because I feel that the story is phenomenal.

The author leads us on an unforgettable journey and in the process, explores numerous themes such as courage, betrayal, grief, family, shame, corruption, murder, greed, friendship, trust, secrets, injustice, and the power of wealth.

The intoxicating combination of an atmospheric setting, morally ambiguous main characters, dangerous secondary characters without scruples, complicated personal relationships, and the overall unpredictability of the tale serves up a genuinely compelling narrative that refuses to leave your mind long after you have finished.

All in all, a diabolically clever saga of murder, corruption, and deception and a solid five star read for me.