You are here: Home / Horror / Review of Cabin at the End of the World by Paul Tremblay 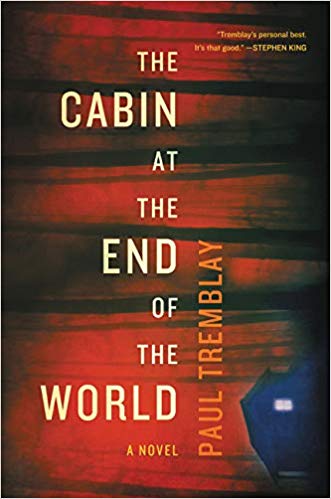 Cabin at the End of the World is a horror novel that follows Seven-year-old Wen and her parents, Eric and Andrew who are vacationing at a remote cabin on a quiet New Hampshire lake.

One afternoon, as Wen catches grasshoppers in the front yard, a large stranger named Leonard unexpectedly appears in the driveway. He is young, friendly, and he wins Wen over almost instantly. They talk and play for a while until Leonard abruptly apologizes and tells Wen, “None of what’s going to happen is your fault.”

Then, three more strangers then arrive at the cabin carrying menacing homemade weapons. As Wen runs inside to warn her parents, Leonard calls out: “Your dads won’t want to let us in, Wen. But they have to. We need your help to save the world.”

The four strangers plead with Wen, Andrew, and Eric to let them in, that they have to, that the fate of the entire world is at stake, but they refuse. Eventually, the four strangers manage to forcibly break in, and there are injuries as a result. The story then turns into a tense and gripping home invasion tale of survival, which is personally a trope that scares the bejeezus out of me.

Once the four of them have subdued Wed and her dad, they explain that the Wen, Andrew, and Eric need to make a sacrifice – an ultimate sacrifice within the next 24 hours or so. If not, the world will be destroyed. So the question is: Are the four strangers cultists or crazies? Or is the world on the brink of the apocalypse?

The book did an excellent job at building up suspense and paranoia as the remote little cabin turned into a house of horrors complete with a torture chamber. I was on the edge of my seat the entire time, to see what was going to happen next and whether that which the four had predicted would come to pass — that is, whether the world actually was on the brink of collapse.

Now I will say that some of the violence that takes place is described in very gory, vivid and disturbing ways so more sensitive readers might want to pass on this one. I do like a good horror novel, so it didn’t bother me too much — though it definitely was disturbing.

This was an uncomfortable book – a real psychological thriller — whose tension escalated as time passed in the cabin. It was tense, suspenseful and gut-wrenchingly horrifying, the kind of book that will either give you nightmares or keep you up at night.

Though it was a suspenseful and gripping read with well-developed characters, at the end of it all, it didn’t quite work for me.

The main reason was the ending: Let me just say that if you like a nice, tidy resolution to a story, then this book is not for you. This is the kind of story that leaves you with more questions than answers, and leaves you with an unsatisfied feeling after turning the last page — or at least it did for me.

It seemed like the author spent the entire novel building up this incredible amount of suspense only to have it fizzle out at the story’s end. I expected more of a dramatic ending — or at the very least, an answer to the story’s central questions.

But the payoff just wasn’t there. Now if you don’t mind somewhat vague endings or experimental stories, then, by all means, give Cabin at the End of the World a try. It just wasn’t the novel for me. ⭐⭐

Purchase Cabin at the End of the World at Amazon