You are here: Home / Suspense/Thriller / Review of Behind Closed Doors by B.A. Paris 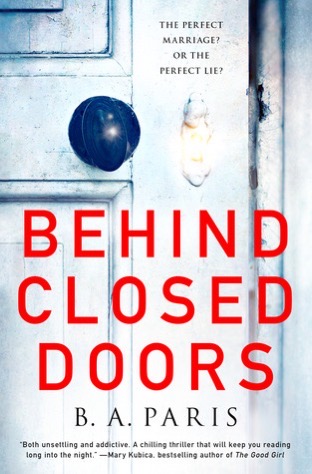 Behind Closed Doors follows a married couple, Jack and Grace, and from the outside, it looks like they have the perfect marriage and that Grace has the perfect life — she has a beautiful home and a handsome, successful husband who never leaves her side. The people who know them call it true love. But things are not as they appear as hinted at by the title, and that is the premise for this heart-in-your-throat domestic psychological thriller. Right from the very start, there is this intense sense of foreboding that grabs you right by the throat and doesn’t let go until the end.

From reading the blurb, it’s pretty easy to figure out what’s really going on. But the extent of it and the diabolical manner in which it’s executed is what’s shocking. I actually thought the blurb gave too much away, and I wish I’d gone into this book without having read it. Still, it was one hell of a hair-raising journey.

I enjoyed how the story alternated between past and present, told from Grace’s point of view. Here we see how Grace met Jack; we see the early days of their relationship and how things ended up the way they are in the present — a living nightmare.

Now there’s really no jaw-dropping twists, turns or surprises (though the ending was fantastic!) and no great mystery to solve. Instead, we follow along with our heroine as she struggles through her terror to find a way out, and it was the anticipation of the unknown — the anticipation of what may be coming that ratchets up the tension in the book. The suspense level is off the charts.

What I found especially terrifying about this story how easily our heroine found herself trapped and isolated, and the realization while reading it that this could, under the right circumstances, happen to anyone was bone-chilling.

It’s quite an intense story and found it difficult to read at times, not because the content was graphic or gory because it wasn’t. Instead, it was the situation of our heroine — one in which every day was filled with terror — how every taste of certain imminent freedom ended in utter disappointment and frustration.

It’s how the author gave us just enough information to imagine the worst — and just when we think Grace’s situation cannot get any worse, it does.

This harrowing, fast-paced super-claustrophobic story was a page-turner for me. The characters of Grace and Jack were extremely well-fleshed out, complex, and believable. As for the story, it was disturbing on so many levels that it made me feel during several places throughout the book as though I’d been sucker-punched.

It’s a sick, twisted, depraved little book with a villain that is pure evil, and yet, I couldn’t put it down. This phenomenal story about mental abuse taken to the extreme was so expertly plotted and drawn out that I was stunned to learn later that this was the author’s debut novel.

The pacing is flawless; the characterization splendid; but what really stood out for me with this book is the tension that the author creates. It had my heart-pounding most of the time I was reading.

Behind Closed Doors is so incredibly nightmarish, raw, gut-wrenching, and unsettling that it’s impossible not to be taken on a wild emotional ride.

Purchase Behind Closed Doors from The Book Depository

Purchase Behind Closed Doors from Amazon