You are here: Home / Mystery/Suspense / Review of Bad Moon Rising by John Galligan 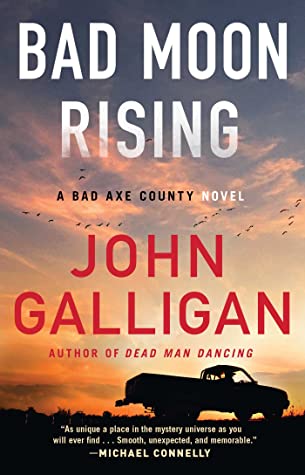 A record heat wave suffocates remote rural Wisconsin as the local sheriff tracks down a killer hidden in the depths of the community in this atmospheric, race-to-the-finish mystery by the acclaimed author of the Bad Axe County series.

Sheriff Heidi Kick has a dead body on her hands, a homeless young man last seen alive miles from the Bad Axe. Chillingly, the medical examiner confirms what Sheriff Kick has been experiencing in her own reoccurring nightmares of late: the victim was buried alive. As the relentless summer heat bears down and more bodies are discovered, Sheriff Kick also finds herself embroiled in a nasty reelection campaign. These days her detractors call her “Sheriff Mommy”—KICK HER OUT holler the opposition’s campaign signs—and as her family troubles become public, vicious rumors threaten to sway the electorate and derail her investigation.

Enter Vietnam veteran Leroy Fanta, editor-in-chief of the local paper who believes Heidi’s strange case might be tied to a reclusive man writing deranged letters to the opinions section for years. With his heart and liver on their last legs, Fanta drums up his old journalistic instincts in one last effort to help Heidi find a lead in her case, or at least a good story…

With simmering tension that sweats off the page, Bad Moon Rising infuses newsworthy relevance with a page-turning story of crime in America’s heartland, capturing global issues with startling immediacy while entertaining from start to finish.

This is the third book in a series featuring Wisconsin local sheriff Heidi Kick. Each book can be read as a standalone (this is actually the first book in the series that I’ve read).

In Bad Moon Rising, our sheriff is tasked with solving the murder of a young homeless man who was apparently buried alive. This isn’t the first murder of this type to occur in the community. A local newspaperman, Leroy Fanta, suspects that the crimes may be connected to a somewhat “unhinged” reader of the newspaper who has been sending angry and disturbing letters to the editor for years. He decides to investigate to help the sheriff with the case and ends up unearthing some pretty dark secrets in the process. The evil at play in the town was quite surprising.

It’s also worth mentioning that Heidi is in the midst of a reelection campaign that has gotten quite nasty, with her nemesis resorting to all sorts of unseemly tactics to oust the sheriff.

I found this book to be utterly captivating, with a gripping mystery to solve. The author does a masterful job of layering on the mysteries until we’re almost frantically turning the pages, impatient to find out what the hell is going on. The suspense is unrelenting to the very end. I also found the characterization in this book to be really powerful. There is no shortage of quirky characters, all of whom add to the overall atmosphere of the narrative and play an essential part in the development of the plot.

I was glued to my seat as I immersed myself in this mind-blowing police procedural that takes the reader down a dark and twisty path and then totally blows your mind with a jaw-dropping conclusion. All in all, I found Bad Moon Rising to be tense, unsettling, a tad creepy, and it kept me guessing till the very end. I plan on picking up the other books in this series as I grew pretty attached to Sheriff Kick by the end of the story.