You are here: Home / Suspense/Thriller / Review of An Unwanted Guest by Shari Lapena 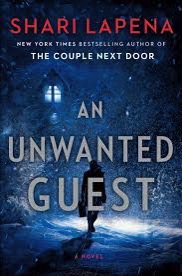 An Unwanted Guest by Shari Lapena follows a group of people who head out to Mitchells Inn located deep in the Catskills for a quiet weekend in the country. It’s a perfect place to do some skiing, work on a novel or simply relax.

So being in the middle of winter, the weather takes an abrupt turn for the worse, cutting off power and phone service. The guests remain in good spirits and make the best of it, settling in until the roads are cleared. The quiet serenity of the hotel’s paradise-like atmosphere is suddenly broken, however, when one of the guests turns up dead at the bottom of the steps.

It looks like an accident – an unfortunate tumble down the stairs. But one of the guests believes that the evidence indicates that this was not an accident. But when a second guest shows us dead — this one clearly murdered — the tension is instantly ratcheted up, and panic ensues.

Fear rises and tensions escalate as everyone is left to wonder: are one of the guests – one of them — the murderer? If so, which one? Or is there someone else hiding in the hotel, waiting to pick them off, one by one?

More murder follows and tensions — and tempers — rise even further as nobody is above suspicion, especially once secrets begin to emerge. Nobody can sleep. Nobody can trust anyone as they all wonder: Which if any of them will survive the weekend?

This was an excellent Whodunit in Agatha Cristie style. I enjoyed getting to know each of the characters along with the backstory as I tried to guess the identity of the murderer, paying attention to all the clues along the way. This alone made the book difficult to put down and drew me right into the story.

I loved that fact that the story was told from the point of view of each guest, which added to the richness of the story. Each character had a distinct personality and backstory that didn’t make POV switches at all confusing. Each character is fully fleshed out, and we end up knowing each of their secrets, thoughts, desires, and hopes. But we don’t learn everything.

In fact, the author reveals just enough information about each character to make you wonder about their true motivations and their reasons for coming to the lodge. The story was, however, an eerie, tension-filled and suspenseful story that was fully immersive as we put ourselves in the shoes of the hotel’s guests. It wasn’t at all graphic or gory though — just a fun though unsetting whodunit.

So I absolutely loved this book. It was a clever, atmospheric and fun Whodunit with vivid, engaging and relatable characters all in a realistic setting. I mean, how can you not love a murder mystery that takes place in the woods in the midst of a storm?

I’m so glad that I went into this knowing nothing at all about it and there were plenty of twists and surprises to keep me turning the page. The author does an excellent job at throwing you off track, and I was unable to correctly guess who the killer was. Which is good — I hate when I guess the ending when I’m only part way through a story.

And even once everything is neatly tied up at the end, the story continues further on for a few extra pages, revealing an extra squeal-worthy twist that I did not seem coming at all and that I loved.

Shari Lapena is a new author for me, and I look forward to reading more by her.

My thanks to the Viking Press for an advanced readers copy of this book.

Purchase An Unwanted Guest at Amazon

Purchase An Unwanted Guest at The Book Depository