You are here: Home / Science Fiction / Review of An Absolutely Remarkable Thing by Hank Green 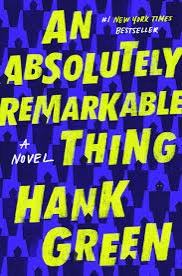 I’ve been following Hank and John Green’s vlog Brothers channel for several years now and was excited when I learned that Hank was coming out with a book. Let me say right off the bat that I listened to this on Audible and felt that the narrator was excellent.

An Absolutely Remarkable Thing follows a twenty-three-year-old bisexual graphic designer named April May who shares an apartment with her roommate/girlfriend Maya (their relationship isn’t all that well defined as April May seems to have commitment issues). The story is told from April May’s point of view and is shared in a memoir format as she recounts a particularly wild and unusual time of her life. So in this way, we’re hearing the story from the future April May. I felt the casual conversion-like format of the book made it feel as though we were hearing the entire story from the mouth of a good friend.

The book starts out as April May is walking home from work at 3:00 am when she notices a giant robot-like sculpture that seemed to have appeared out of nowhere. It’s 10 feet tall and resembles a giant Transformer wearing armor. April decides that the people should be paying more attention to incredible things like this statute in their city, so she calls her friend Andy to meet her. There, they create a video of the sculpture, name the sculpture “Carl” and then upload it to YouTube.

Much to April May’s surprise, she learned that overnight her and Andy’s video had gone viral but not only that, the “Carls” have appeared in cities all over the world, all identical to her “New York Carl” raising all sorts of questions, concerns, and discussions worldwide. Being the first to document the existence of Carl — the person who made “first contact” if you will — April May is thrust headfirst into the spotlight and soon becomes a social media sensation, appearing on numerous television shows and becoming quite rich in the process. In fact, she ends up becoming more of an idea to the people of the world than a person as she builds up her “brand” based upon her connection to the Carls. She gets so caught up in all the hype surrounding herself that she even begins to kind of lose herself as she morphs into this branded, fake April who exists solely for her social media and public persona.

The story really picks up steam as the world gets closer to solving the mystery of the Carls while April May tries to keep her life from spiraling out of control. It’s also worth mentioning that the world basically splits into two factions: Pro-Carl and Anti-carl with April May being the center of it all and though this, we end up seeing the best as well as the darkest sides of humanity.

I know there are a fair amount of people who disliked April May’s character but I rather liked her. What I especially enjoyed about her was how flawed she was. She’s narcissistic, self-centered, craves attention, is addicted to social media, is often insensitive to the feelings of others and makes more than her share of mistakes. Yet, it’s these characteristics along with all of her awful choices that make her human, all the more relatable and all the more likable. Sure, she made a lot of horrible decisions, and I disagreed with a lot of what she said and did. But through it all, I never disliked her. I think that was because she knew that she was flawed, knew she made terrible decisions and tried desperately to hide her flaws from her social media presence — though it was her social media presence that often caused her to make said poor decisions.

I enjoyed the fact actually that she was somewhat volatile and unpredictable, perhaps even an unreliable narrator, so we never knew what she was going to do next, which kept the story compelling.

I also loved how the whole world came together to help solve the literal puzzles of the Carls, a testament to the importance of working together and coming together as humankind. So in this way, the book was a commentary about humanity and how rather than taking things on as individuals, it’s when we work with others that things really begin to happen.

I also liked that though the message was a sharp commentary about our society, fame and social media, it wasn’t delivered in a heavy-handed or preachy way. I also found all the diversity and representation in this book refreshing.

Additionally, I found the mystery of the Carls riveting and though we do find out where they came from — kind of — we don’t learn everything about them. I hope this means that there will be a sequel to this book coming down the pipe.

I wish Andy’s character would have been built up a little more. As it was, I felt he was under-developed, and we barely learned nothing about him. I would have enjoyed seeing him share a little more of the spotlight with April May.

I’m also kind of on the fence about the ending. Though everything was wrapped up and we learned the mystery of the Carls, we are hit with a surprising cliffhanger which causes you to rear back and go “Whoa!”. Again, I’m hoping to see this vague-ish ending resolved in a future book. But that aside, I was satisfied by the conclusion and felt that the majority of my questions were answered.

Other than that, there really wasn’t anything I disliked about the story and felt the author delivered us a polished, high engrossing and spellbinding tale.

I loved what the author had to say about such topics as social media fame, power dynamics, extremism, news, and Internet addiction, how we react to those different than us or that which is new or unfamiliar to us, and the effects that social media has on our society (for both good and ill), all the while delivering that message in a laugh-out-loud enjoyable way. I thought the book was not only a pleasurable romp but was also insightful and relevant to today’s times.

I thought this was an endearing book with quirky characters and a quirky story which provided an eye-opening social commentary on obsessive social networking, internet fame or any type of fame for that matter, ego and the horrors of extremism.

I’ve seen An Absolutely Remarkable Thing classified and referred to as a young adult book, but I think it should be classified more as New Adult. The main characters are in their early 20’s, most just out of college and though I loved the messages of the book, there is a good amount of swearing and conversations about sex (though not explicit), which many people may find inappropriate for younger readers.

I ended up loving this book and look forward to seeing what Mr. Green comes up with in the future. Recommended!

Purchase An Absolutely Remarkable Thing on The Book Depository